History of Sourdough Bread
Sourdough bread, also known as “wild yeast” is an ancient bread leavening practice that dates back to as early as 3,500 BC in Egypt with the discovery of fermentation.

Fermentation is best defined as when a group of chemical reactions induced by microorganisms or enzymes split complex organic compounds into relatively simple substances, especially the anaerobic conversion of sugar to carbon dioxide and alcohol by yeast.

The fermentation of grain or flour…introduced a form of bread making called adding “leaven” to bread. This ancient practice is proved by unearthed wall paintings and the analysis of bread loaves and beer remains from the ancient Mesopotamia region. Creating wild yeast cultures was a simple and practical way to create “leavened bread” at a time when baker’s yeast was not yet invented – not until 1860!! Unleavened bread is mentioned numerous times throughout the Christian Bible from the Commemoration of Passover for Jews during the Exodus to the teachings of Christ in the New Testament. According to the Hebrew lexicon, the term unleavened bread is derived from the word matzoh, which means “bread or cake without leaven.”

By 800 BC Ancient Greeks had learned from the Egyptians about using leaven for bread which soon catapulted the expanse of adding sourdough or “leaven” to bread recipes throughout the rest of Europe. The Roman Empire around 750 BC played a large part in the growth of the bread-making industry. 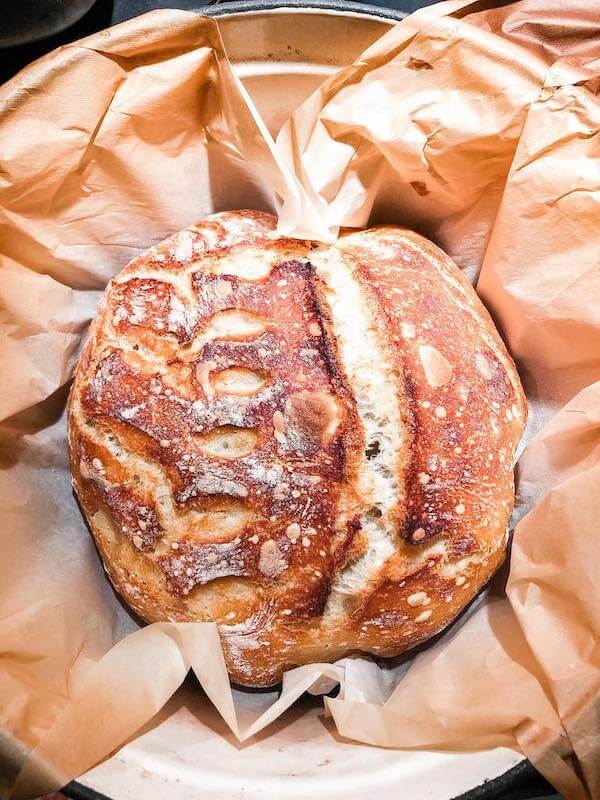 Sourdough bread making – a connection to the past
While food culture varies across the world the one thing that seems to be a pattern of consistency has been bread making…specifically, sourdough bread, which has been a main staple in many cultures and homes throughout the ages. Families of the medieval era depended on bread as the main source of nutrition for their families. Grain was often easy to come by and rather “inexpensive” for most families. It didn’t take much to make a loaf of bread. All someone needed was ground wheat and water.

As time has gone on and our culture has developed into a culture of “busy”… convenience is a factor that plays into every aspect of our lives…and with it…sourdough starters slowly but surely became a nuisance to care for and with the invention of bakers yeast it created the opportunity for bread to be made more quickly and without the hassle of maintaining a starter. However, one of the biggest cons to this evolution of bread making and the invention of baker’s yeast… is that bread made with baker’s yeast and that skips adding a fermented starter now lacks nutritional benefits. Commerical storebought bread although convenient does not carry the same nutritional value that sourdough does. Sourdough bread introduces a plethora of organisms that have prebiotic and probiotic-like properties, which help improve overall gut health and releases healthy bacteria called “gut microbes”. The standard American diet has all but removed homemade, fermented foods…which greatly affects our overall health as a population.

Sourdough Bread Nutrition
A loaf of sourdough bread will provide you with vitamin E, vitamin B1, B6, B12, thiamin, niacin, folate, riboflavin, potassium, zinc, iron, magnesium, selenium, calcium, phosphorus, and manganese. All bread contains essential minerals and nutrients – however, our bodies can’t easily absorb these nutrients because of a compound called phytates or phytic acid which binds up the nutrients. Phytates are found in most grains and especially your common store bought white breads…sourdough however, when made using a starter, creates a lactic acid that neutralizes phytates by lowering the pH of the bread….leaving sourdough bread with a higher level of available minerals that are more readily available for our body to use.

The below information is taken from a pub med research article that dug into the details on how sourdough bread supports the microbiome in our intestines.

“….The sourdough microbes, particularly the lactic acid bacteria (LAB), give much benefits to our body’s gastrointestinal system. It improves our digestion system and increases nutrient absorption into our body. The sourdough fermentation process induced naturally by LAB and yeasts produces invertase enzymes which aid in digestion of short-chain carbohydrates present as non-digestible starch while the enzyme phytase will neutralise phytic acid present in grain-based products to free up the digestive enzymes of trypsin, pepsin and amylase to act more effectively in breaking down proteins, starches and fats in our body. The natural fermentation process in sourdough breadmaking helps patients with gastrointestinal disorders, e.g., irritable bowel syndrome (IBS) and also patients with celiac disease, e.g., gluten intolerance syndrome through alteration of carbohydrates and protein molecular structures, respectively. Consumption of sourdough bread allows better food digestion, promotes better nutritional uptake of minerals and vitamins and also improves gut health with the presence of LAB in the form of prebiotic food. From the point of view of artisanal baking, sourdough bread is always highly praised for its authentic and rustic look coupled with unique sensorial and eating properties. The organoleptic properties are much improved through enhanced flavour compounds and dough softening. The acidic environment resulting from the LAB fermentation gives the bread a longer shelf life.”

With all of the above now in our arsenal of knowledge…it is good to always eat carbohydrates and breads in moderation. However, if one must or is interested in having bread in their diet. Using sourdough breads, whole grains, and seed breads are your best option for optimal health and nutrition.