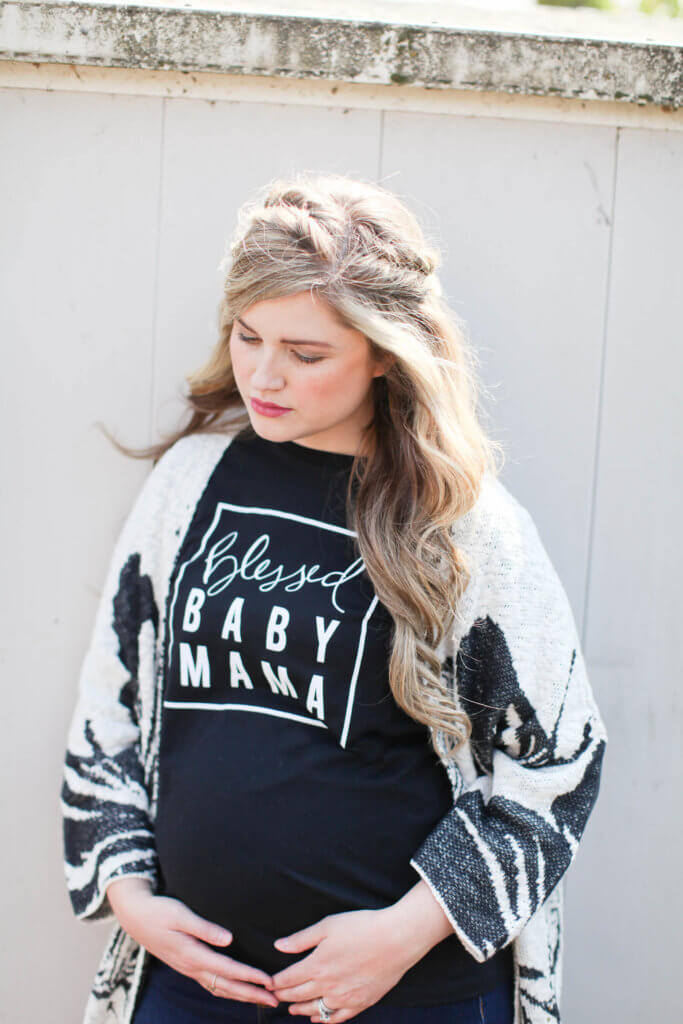 I will be 20 weeks prego this week (half way there)! I've learned that the baby can now hear sounds in the womb (I better clean up my sailor mouth), he/she is also reaching 10 inches in length and is getting closer to being almost one full pound in weight! Time sure has flown by and my ever expanding mid-section is proof. It is as if the bump just appeared out of nowhere one morning and now it is here to stay. This week Dusty and I will be going in to have our 20 week ultrasound done – we are so excited to see the baby again! We will also be finding out the gender during a Gender Reveal Party with some friends at a backyard BBQ we will be having – we can't wait! We for sure will be sharing on SnapChat right away – be sure to follow along and add me SnapChat: samanthaecollin.

I thought I'd take some time to reflect on how the first trimester went for me. I don't mean to make this a post all about complaining and about the woes of the first trimester, because at the end of the day, I know the gift we will gain at the end of it all is worth every minute of the sickness. Also, after the miscarriage we experienced with our first baby, going through morning sickness was a most welcomed affair, so long as it meant the baby was healthy and thriving – even if I was all but thriving.

In this process I've found that pregnancy can sometimes be a lonley journey. Sure, I had Dusty, my family,  friends and awesome Doula, Melinda checking in on me…and they still do…but when you are in the thick of what feels like nausea from hell, it can feel pretty desolate. I was couch-ridden for almost a week and a half starting at roughly 8 weeks, when anything fun and "social" was taking place I sadly had to pass. It wasn't until week 9 that I was able to pull myself together and find some temporary ways to combat the nausea and fatigue. This allowed me to go back to work after taking a week off. I struggled through my day-to-day duties, sometimes I found myself staring at my computer screen, deep breathing, praying that I wouldn't need to race out the door and down the hallway (100+ yards) to the bathroom to vomit (I never would have made it) – so thank God it didn't get to that point. Looking back on it, I am not sure what is worse…actually throwing up…or feeling so nauseated that you should…but can't. I never did experience any vomitting. However, I was close, too many times to count. Here are a list of all the different symptoms I dealt with during the first trimester.

There were moments during the first trimester where I would literally curl up in a ball on the couch and cry on Dusty's shoulder. Feeling as crappy as I did wasn't fun at all. The worst part was that it was unpredictable, some days it wasn't to bad and other days it was awful. My typical nature of "go go go and do do do" was being stifled by the pregnancy symptoms I was experiencing…and all my body was willing to let me do was lay on the couch and watch PBS (aka the last season of Downton Abbey). But, I got through it!

The end of the first trimester started to take a more positive turn symptom wise by week 17 and this was also when I felt the first flutters that were the baby moving. At first, it almost felt like a butterfly might be trapped inside of me! Now at week 19 (almost 20) I am feeling much more myself. I still have an occasional moment of yuckiness that causes me to have to slow down and rest…and I still have to pop some Tums here and there to help with heartburn and indigestion…but all-in-all, things are much better!

Don't forget to stay tuned to later this week when we announce the gender of our baby! We for sure will be sharing on SnapChat right away – be sure to follow along and add me SnapChat: samanthaecollin.