Today is the first day of Dusty’s second year of medical school and I figured now would be the best time to hit “publish” on this post. Not that I’ve been stalling, but I am not known for being punctual and since first year has come and gone it only feels right to share the wisdom (or lack there of) that I’ve acquired. I feel like Dusty should be the one writing this post, considering he is the one going through this whole med-school thing first hand, except his blog post would be a little less detailed…it would go something like “I barely slept, I took a lot of naps, drank a lot of coffee and I studied a lot”. I think the perspective I have is unique. I wasn’t necessarily in the trenches doing the studying, but instead I was witnessing what the day-to-day life of a med-student looks like and how the role of a spouse plays in to it. Disclaimer, I will use the term “we” throughout this blog post, simply because, when you’re the spouse/fiance/girlfriend/boyfriend of a med-student there isn’t an “I” any more, it is a “we” because teamwork makes the dreamwork and any med-student would tell you that once the journey begins, the whole family ends up being involved.

Here is the limited amount of wisdom I feel I can pass on after the first year of medical school.

1) Unrealistic Expectations
When we first started packing up our lives to move 7 hours from home, Dusty and I had very vague and naive ideas on what this whole “med-school” thing would be like. We found ourselves saying “this shouldn’t be has hard as taking the MCAT” (which was really damn hard on both of us) …”we definitely will be able to make time to hang out weekly”, “we can definitely fit working out together in to our schedules”, “we can totally bring the dogs for a walk every day together”….and the list goes on. We had just went through a blood bath that was the MCAT and now life was supposed to get easier, at least that was what we thought. The whole “getting in to med-school” part was finally was over – we made it! He made it! Now it was time to sit back and enjoy it, right? Wrong. Little did we know the real difficult part of the journey had just begun. Now… don’t get too scared if you’re a soon to be med-school spouse or something of the sort. For Dusty and I, our expectations were just a little too….cheerful and optomistic? We were so excited to have gotten accepted …to have escaped the MCAT…that at this point all we could do was expect good and positive things. So we were just a tad surprised when things didn’t start off as we had hoped it would. Each student finds medical school difficult for different reasons. Some feel like they are sinking with each exam (maybe the word drowning even works), others feel they are just barely doggy paddling, and then some can find a way to breast stroke across the daunting lake that is exams, exams, exams and more exams. Each student has their own experience, yet none will tell you it was ever “easy”.

2) Time Becomes as Precious as Gold…or Cheese
One thing we didn’t realize right away was that time would soon become as precious as gold, or cheese… if you like cheese and chocolate…or wine, yea it was just as precious as any of those. Anyway, it soon became apparent that Dusty and I weren’t going to spend many evenings together and that I would soon find myself curled up on the couch with a book, tea, our two pups and a good sappy BBC drama on PBS or netflix. Doesn’t sound too terrible…right? I made the most of it. However, as much as Dusty could give two hoots about watching Downton Abbey with me…an evening on the couch just relaxing in eachothers company became very very rare. We realized that we had taken those sort of moments for granted before medical school. Simply sitting down for dinner together and having even 10 minutes to chat about our day was now considered a treasured 10 minutes of life that we may not get again for many days. There were some nights before an exam where he would come home at midnight and I would be asleep already, then he would wake up at 4 a.m. and head back to school, and of course, I would still be sleeping which left our “time together” to feel more like a dream than a reality. As soon as an exam was over, he’d come home and sleep sleep sleep. When we finally had some time to spend together we would enjoy the simple things like walking the dogs, sitting and watching our favorite show, having dinner together, and just lounging at home.

3) Three Words: Coffee in Bulk
I found out very very quickly that Dusty would cosume more coffee within the first year of medical school than a small village of people could in five years. Coffee basically became his life line as sleep became slim. I am pretty sure if he could have attached an IV to his vein and walked around with bags of coffee pumping in to his system on the regular he would have. Getting a membership at Sam’s Club or Costco became a very smart idea in order to avoid frequent freak outs due to a possible coffee draught at the Collins House. So, if your significant other is a coffee drinker. Stock up well. Stock up reeeaaalll well.

4) Loan Living – Learning to Adjust
For families who may have had two incomes (like we had) before starting medical school, the change to receiving financial aid and living on one income became a little challenging, but we’ve managed to make things work. To put it simply, we made sure to simply live within our means. With this change in our financial situation also came adjusting the way we spent our money….because in reality the money we are getting from loans is all money we will some day have to pay back and then some. Dates night are nights at home watching Netflix with popcorn!

5) Learning the Lingo
I quickly realized Dusty would start talking in a language that was absolutely unknown or ever heard of by my ears. It came in the form of long terminology and crazy acronyms.

6) Ask For What You Need
Dusty and I quickly realized that the only way we would be able to navigate medical school as a couple was to over communicate. I couldn’t depend on Dusty to read my mind because most the time he was still trying to figure out how to make sense of what was going on in his own. I started to tell him directly about things I would need his help on and give him a week or more notice so that he could put it in his schedule and then I would kindly write it down for him on a little notepad that sits near the coffee pot as a kind reminder.

8) Summer After First Year Rocks
This past summer (the summer after Dusty’s first year) was the best, he was technically still on a “student” schedule which gave him over a month off! We made the most of it and visited family and spent time at the lake, he most likely won’t get that much time off again till after he retires…yikes!

9) It’s Doable & You’ll Survive
Although there were moments that were hard…really hard…it was all doable. He made it out swinging, we made it out alive. It was hard, but it is doable and I should have just listened when those in years ahead of us said “it will all work out” or…”you will get through it”!

10) You Are on the Same Team
One of the most important things I’ve learned being alongside Dusty as he works through medical school is that we are a team. C-c-c-corny, I know, I know…Nicholas Sparks couldn’t have said it better…but in all honesty…this process has shown me the importance of encouraging him as he persues this dream. It has taught me selfnessness and independence all at the same time. That with patience and a lot of faith in the big guy upstairs…I can be enough for him and myself if I work on it intentionally.

I made sure to take a moment this morning to snap a lovely picture of him and then us on the first day of his second year of med school, can’t let this moment go uncaptured! Onward! 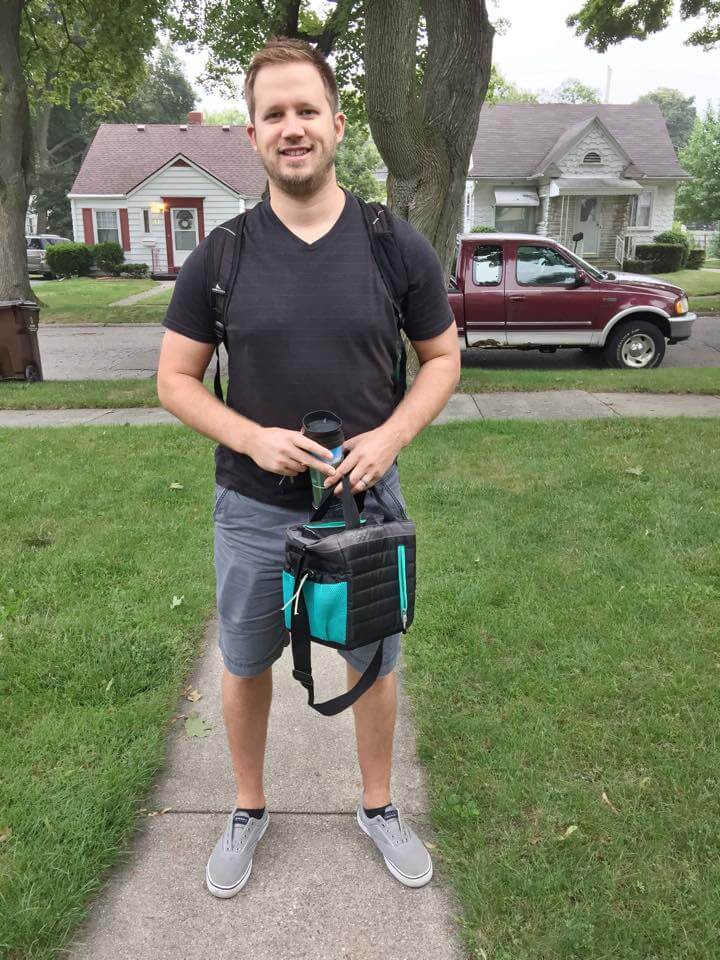