You may be able to guess what the premise of this lovely blog post will be about just by glancing at the ever-fascinating title. So where to begin?

Dusty and I took a little mini-getaway last weekend to the “northern” part of lower Michigan. It was the perfect way for us to spend some quality time together before he started classes again for the summer semester. We found a nice little bed and breakfast that allowed pets, so we brought Reo and Gus along for the journey.

Friday afternoon we loaded the car up and started our trek 3 hrs north. The drive started off fair enough, we were just leaving town and had stopped for our much desired cup of Tim Horton’s coffee, when we heard a wretched gag/dry heave come from the back seat. I spun around in the passenger seat just in time to see our little Reo vomit up his morning dish of Rachel Ray dog food. Ick… we cleaned it up as best we could and got him out of the car for some fresh air and a drink of water. We were pretty sure it was just caused from his full stomach so we hopped back in to the car and started on our merry way…..when it happened…again. This time there was a little less dog food, but a lot of other nastiness. We soon realized that this bout of vomiting wasn’t from any particular meal or thing he ate…but was due to motion sickness/car sickness. Once the car started moving for 10 – 15 minutes his jowls would get full of saliva and he would begin drooling, his little eyes looks sad and tired. I felt so bad! It was terrible. We picked up some children’s dramamine. Which helped. For a little while. Needless to say the whole drive to our destination was spent pulling over to clean up puppy puke. The next morning we refrained from feeding him a whole breakfast and instead gave him a couple dog treats and some dramamine. It helped for the most part, no vomiting but some occasional drooling that caused us to have to pull over and be still for a bit to let the poor little guys’ stomach settle down. Seriously? Of course WE have the puppy that gets motion/car sickness! Aside from having to push through this unfortunate turn of events we had a great weekend!

Sick little Reo, we have a vet appointment coming up to see if there is anything else we can do…we’ve heard they can “out grow it” but chances are he won’t out grow it before we make another 8+ hour drive this July. 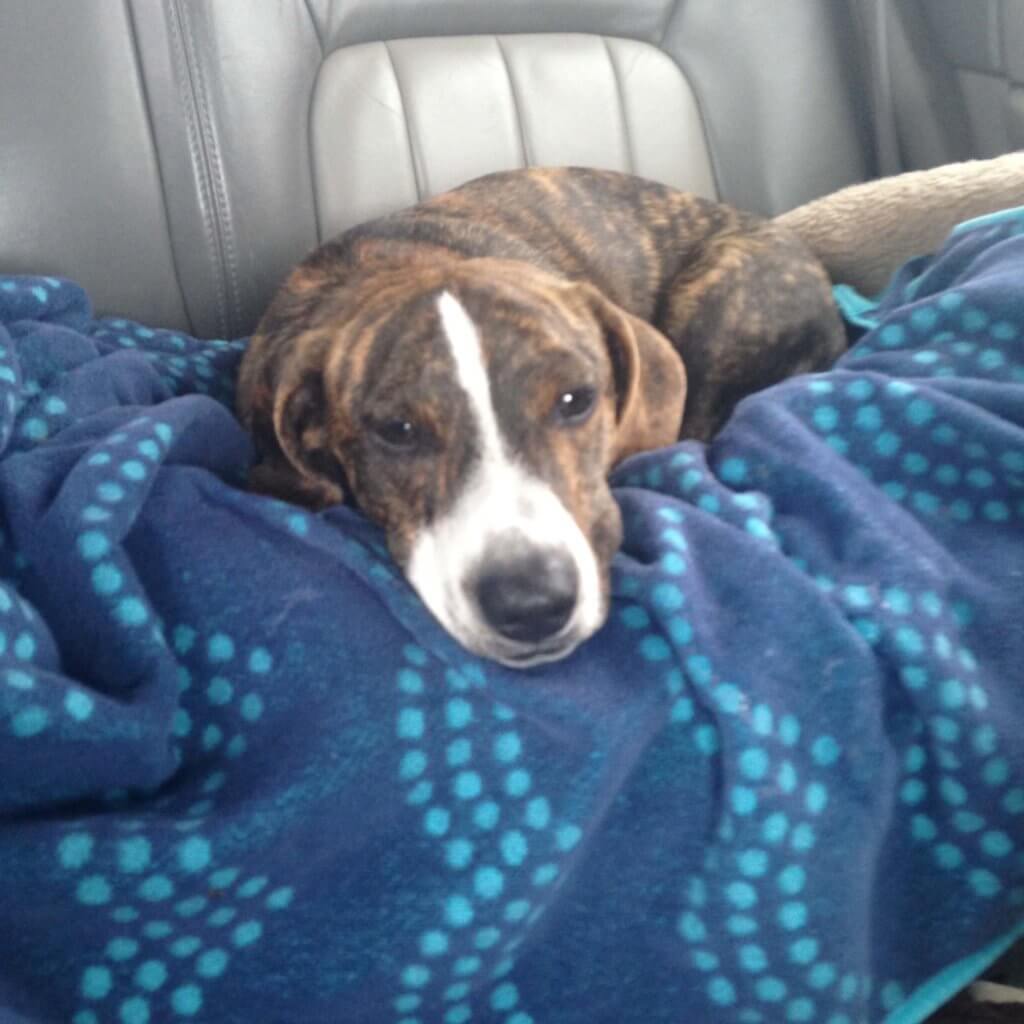 Aside from the unfortunate event that was puppy vomit…we had a great time venturing around a lovely little city, checking out the old homes and quiet streets that were not yet inhabited by a plethora of tourists. And Reo is just happy to have four feet on the firm motionless ground. 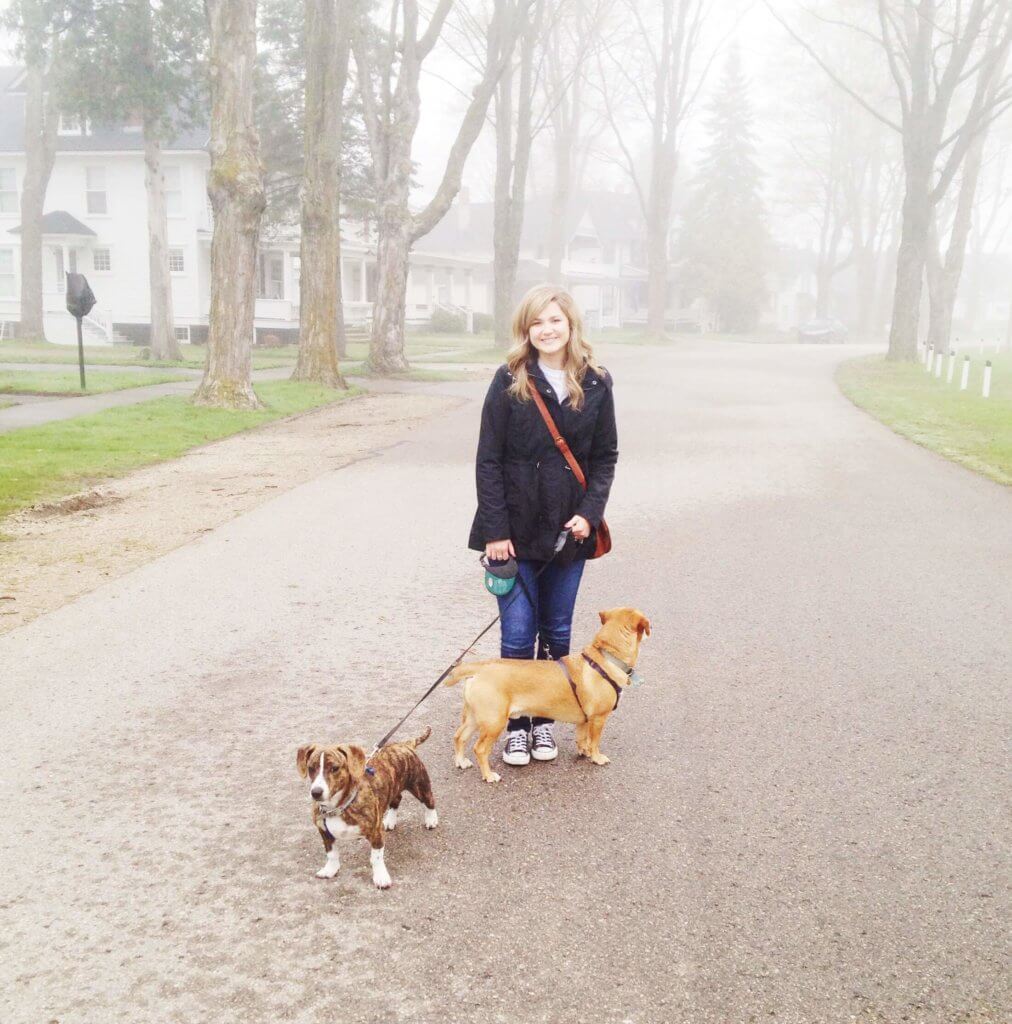 During our trip we visited Leland, MI which is located in the Leelanau Peninsula near Traverse City, we also visited Sleeping Bear Dunes, another breathtaking tribute to the thousands of lovely places to visit in Michigan.  It felt so refreshing and great to be by the lake. 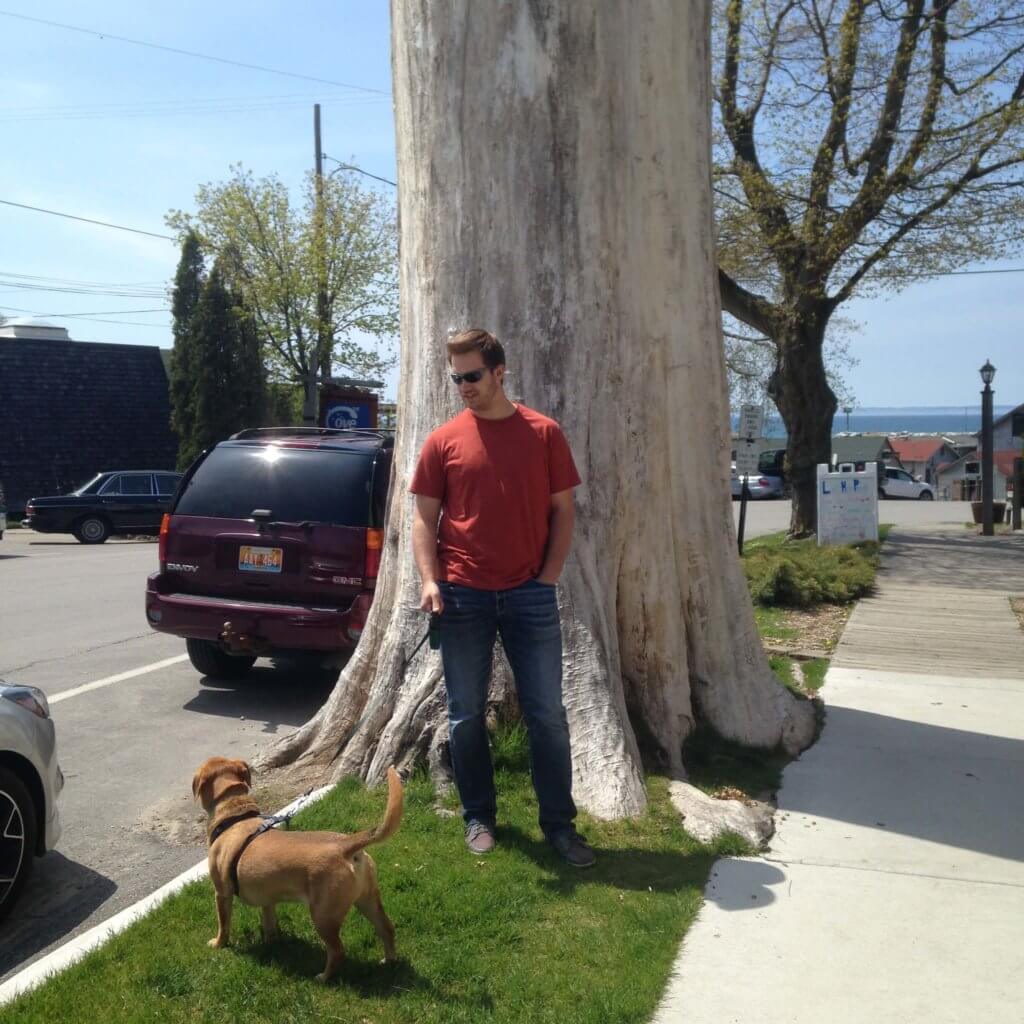 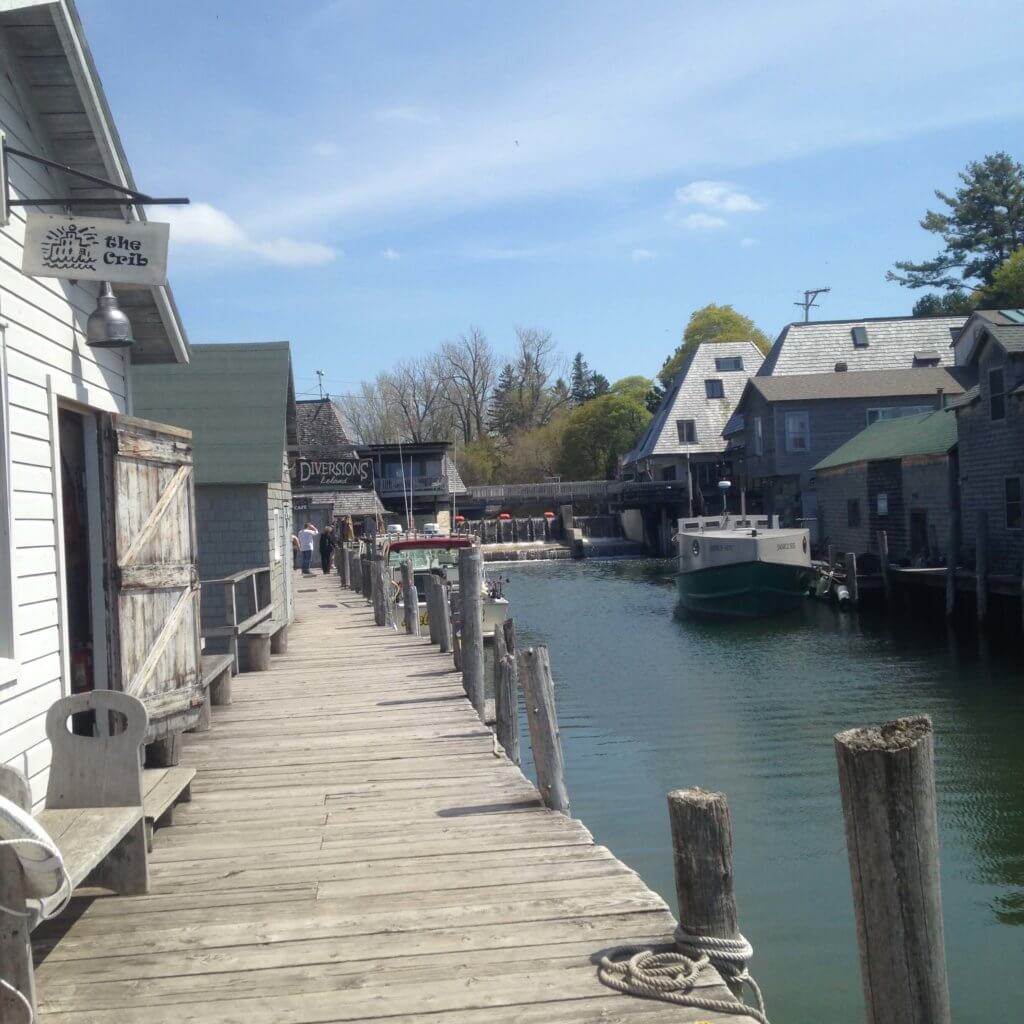 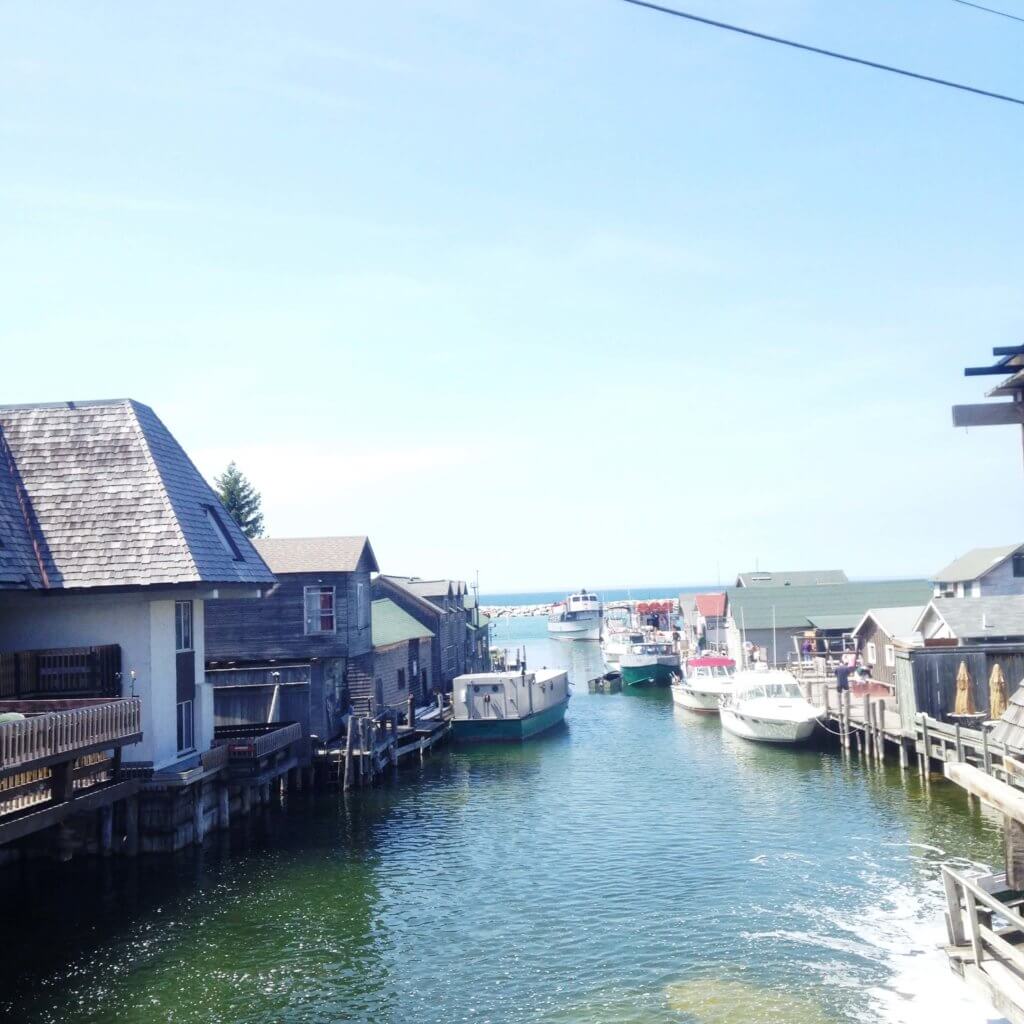 After visiting the cute little fishing town that is Leland, MI we went to Sleeping Bear Dunes and did the Dune Climb. We went up to the first look out and called it good. We sadly were huffing and puffing all the way up. I am pretty sure a grey haired grandma and her 4 little grandchildren ran past us on the way up. 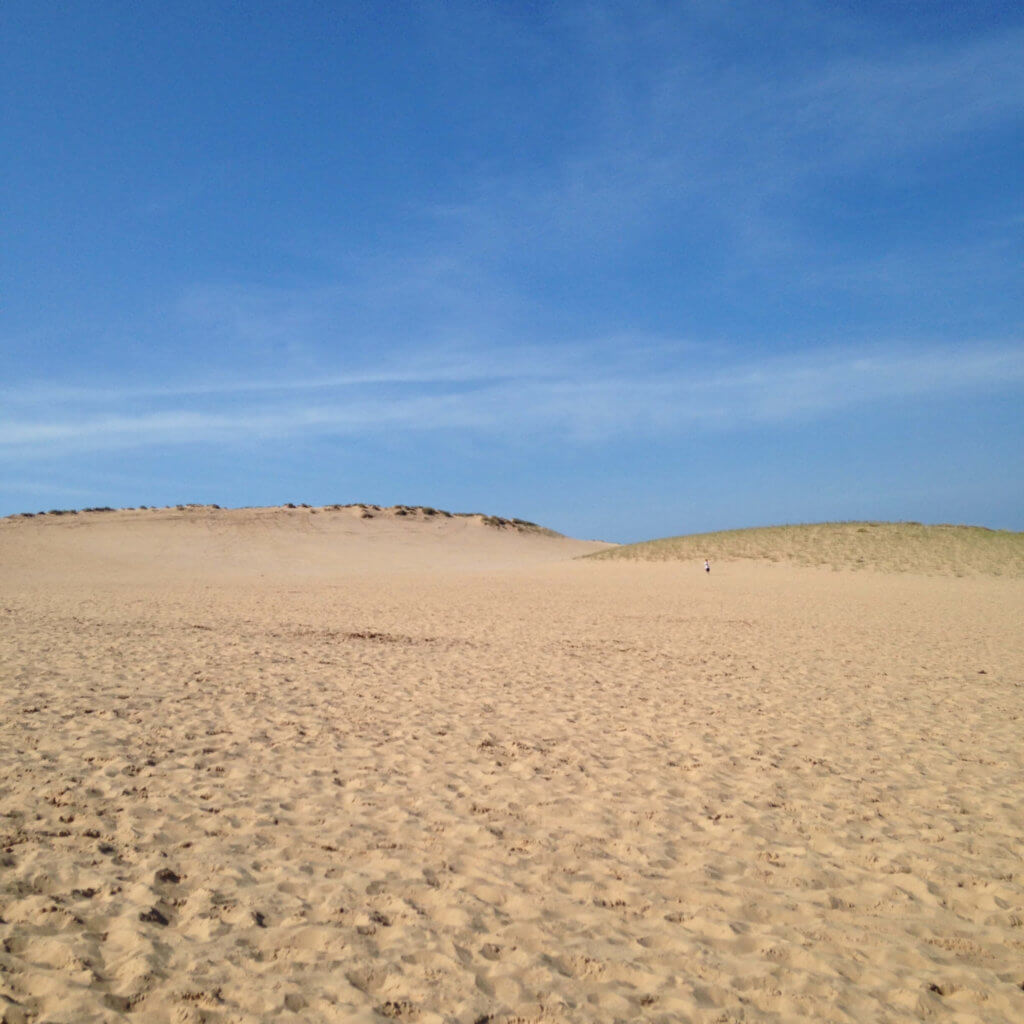 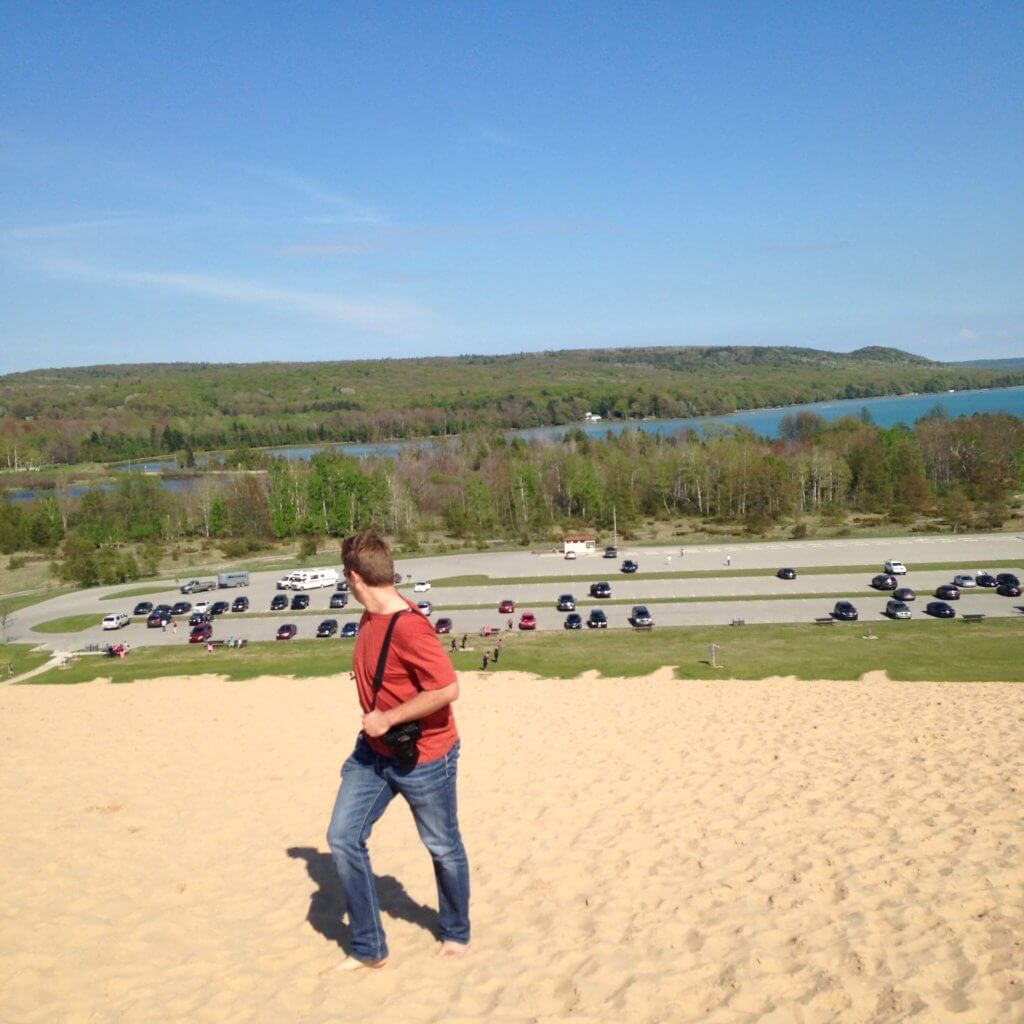 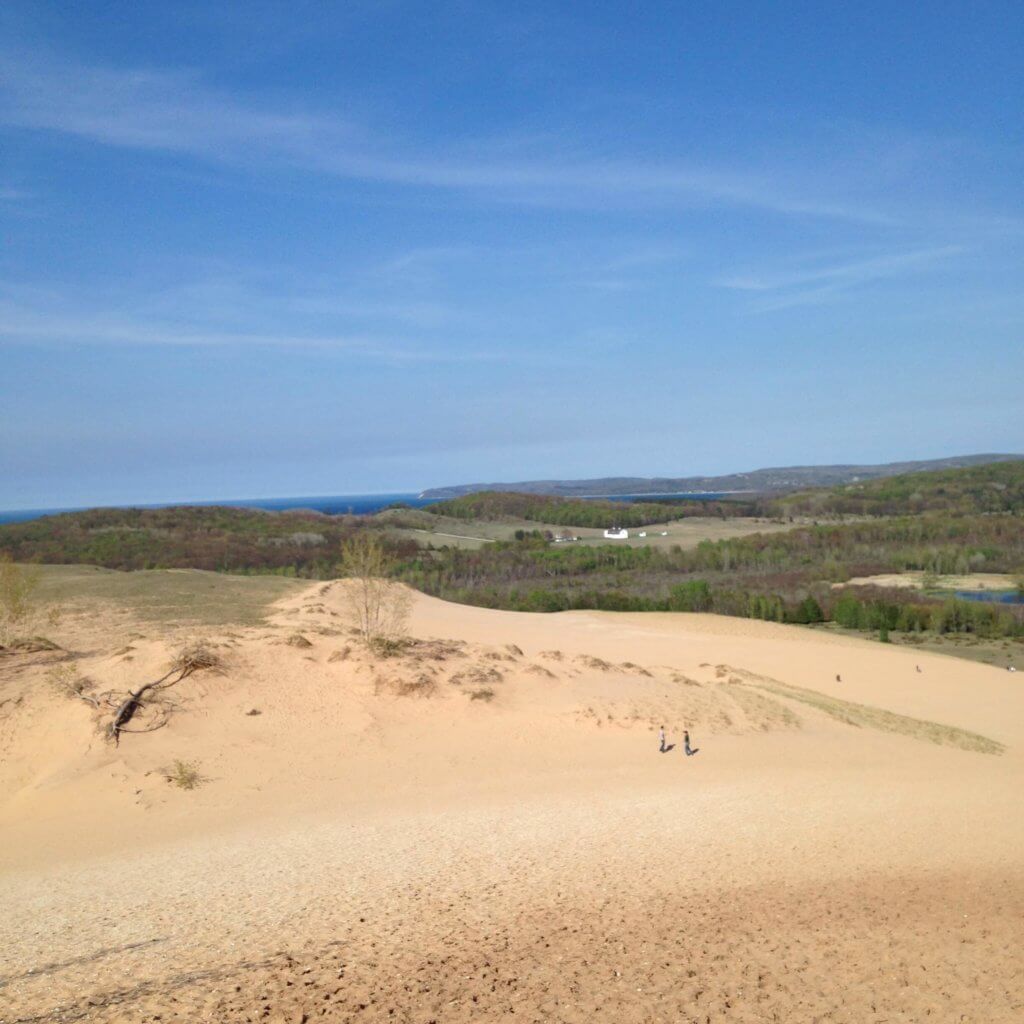 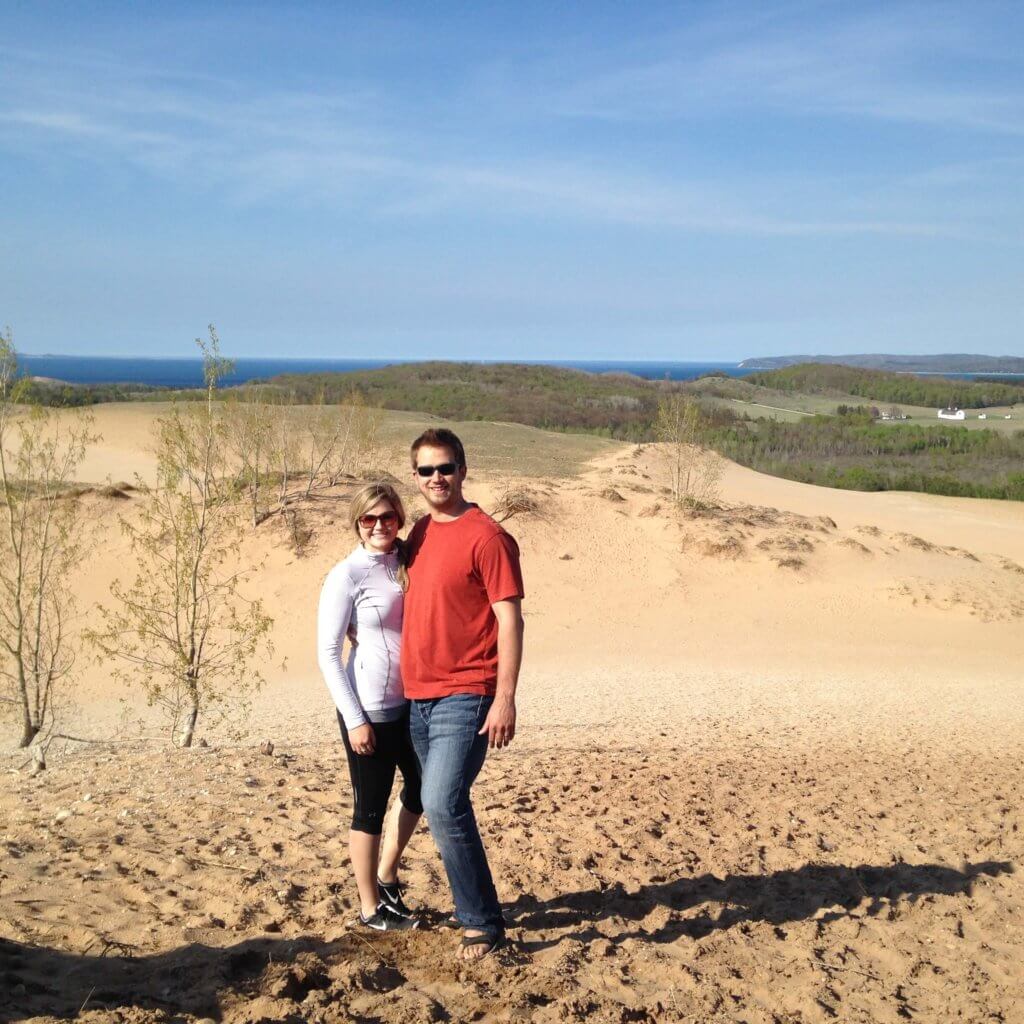 The way down was way more enjoyable. 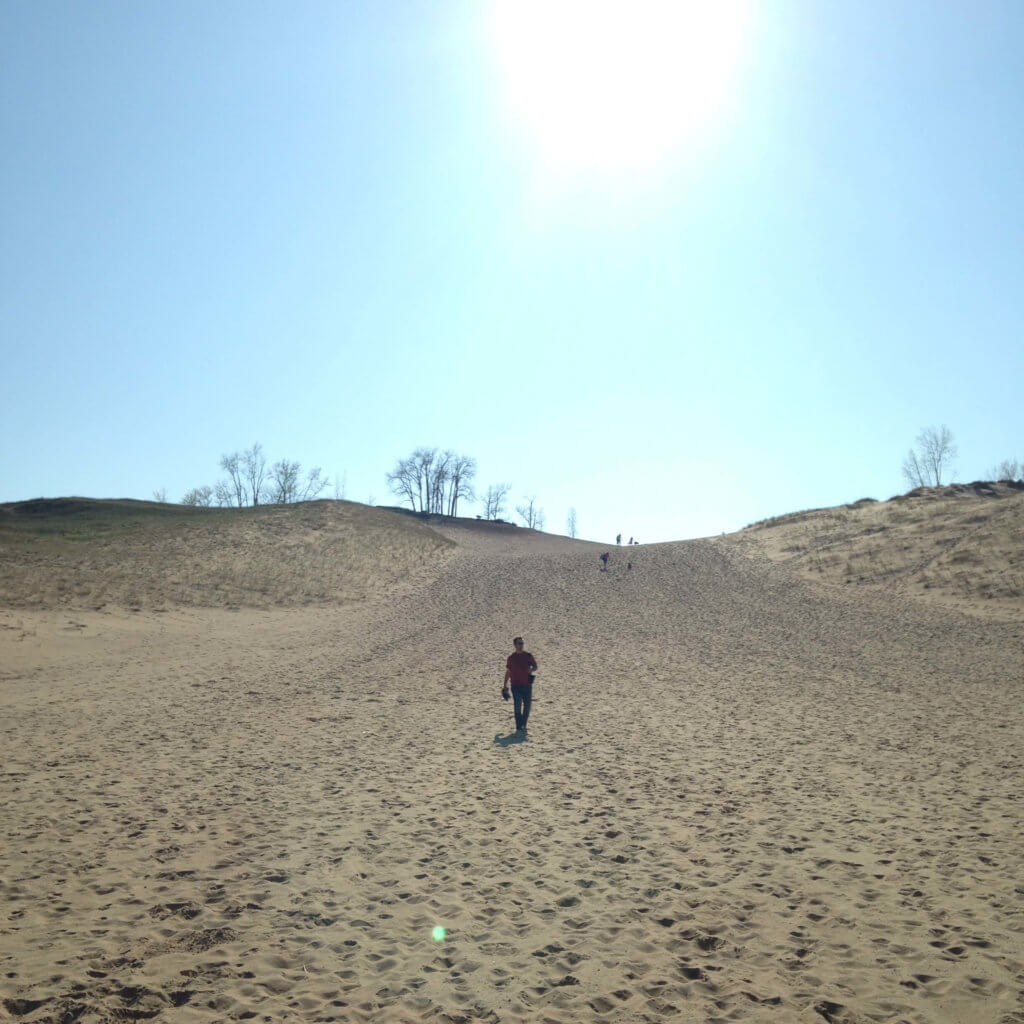 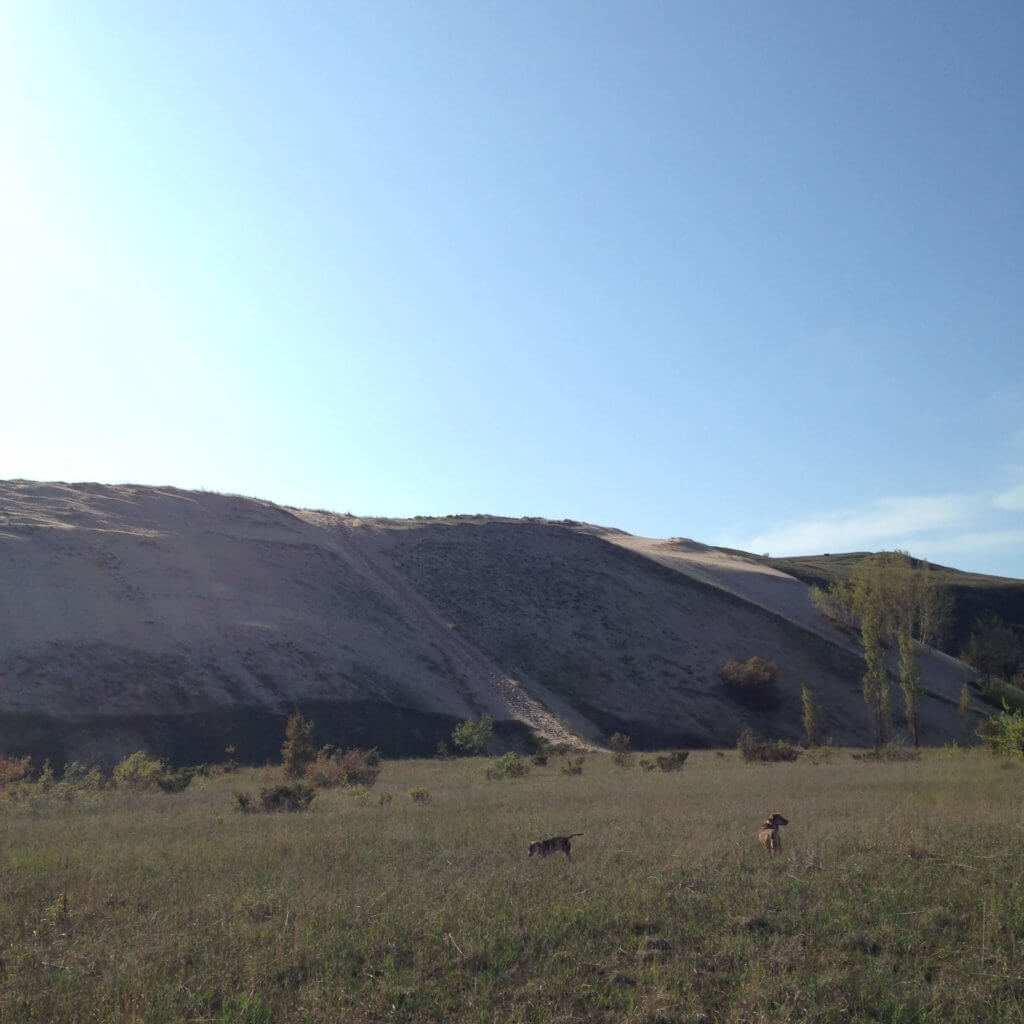 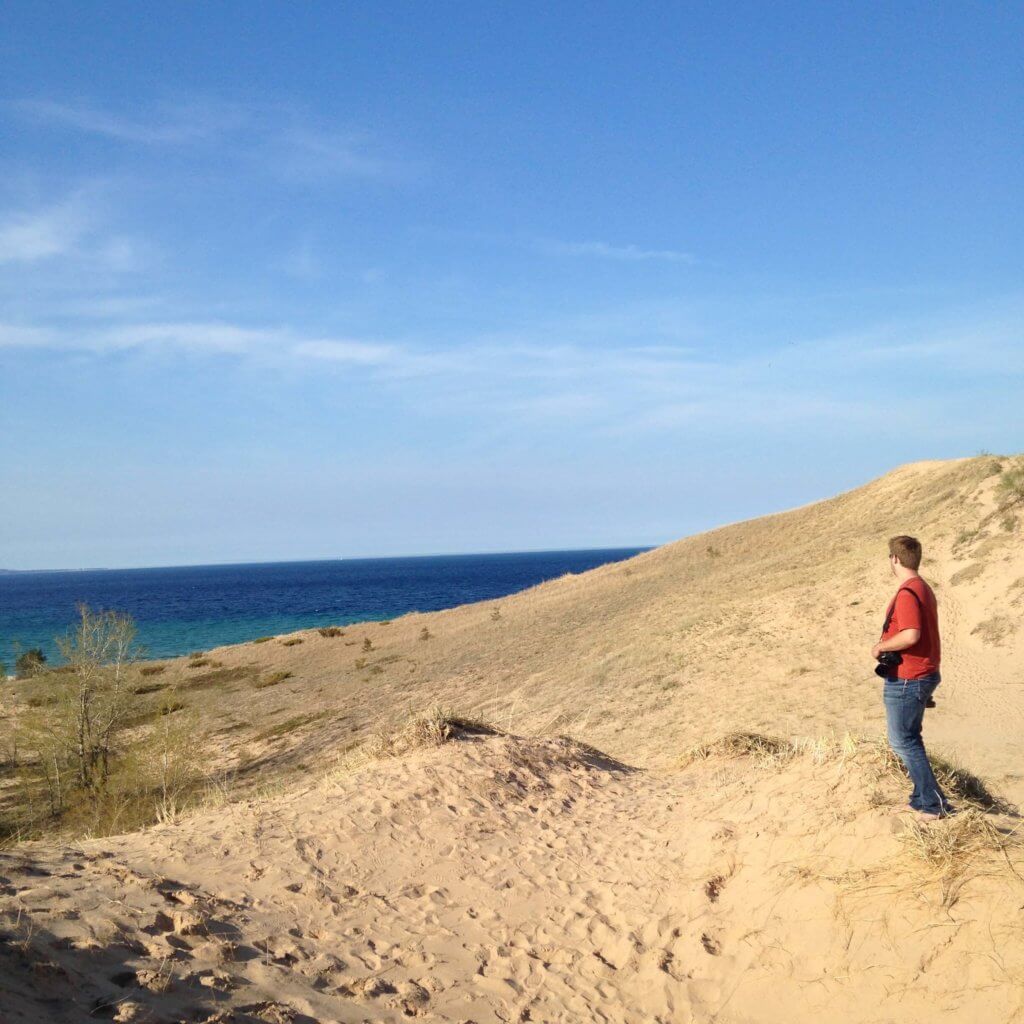 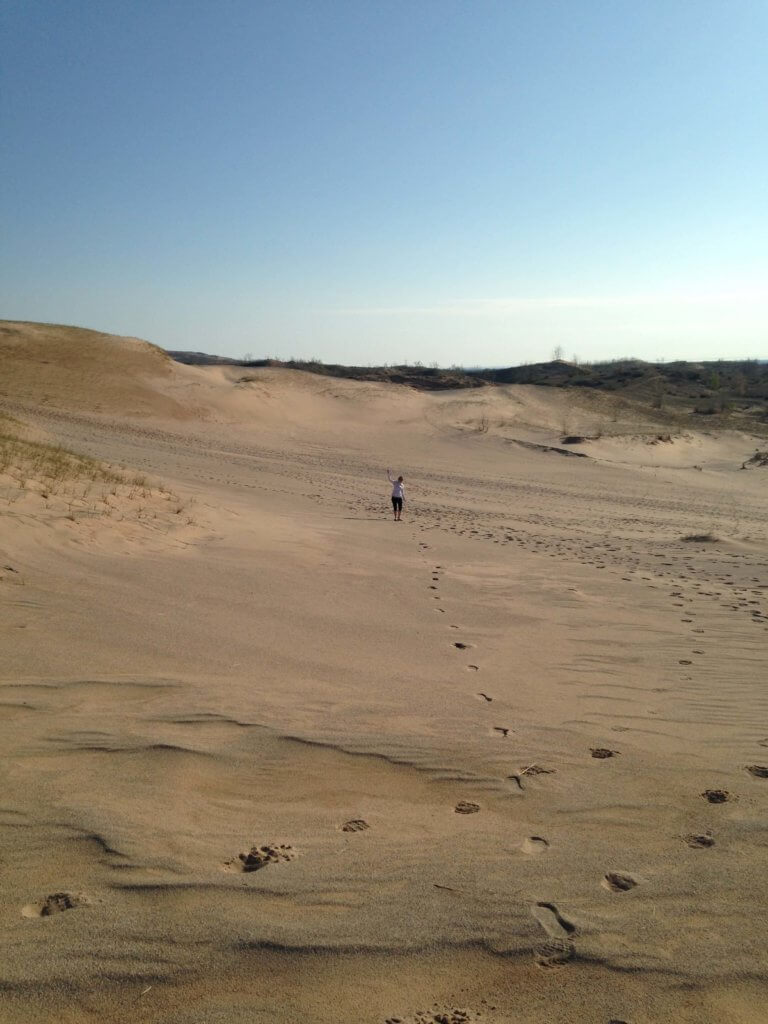 Epic romance all over the place… 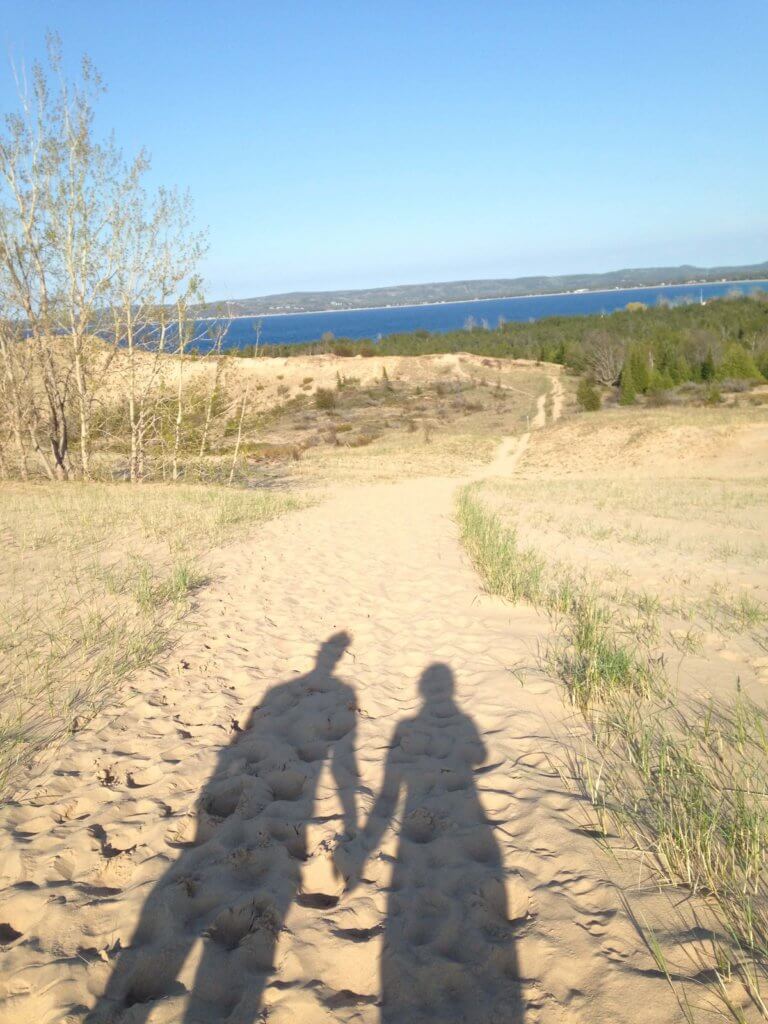 We stopped at a middle-of-no-where restaurant on a golf course and the food was to die for! This delicious meal was considered “farm to table” and it was so good we ate it all and then some and had to almost roll ourselves out of the place. The waiter made a few comments about how fast we ate and how much we ate. hmmm… 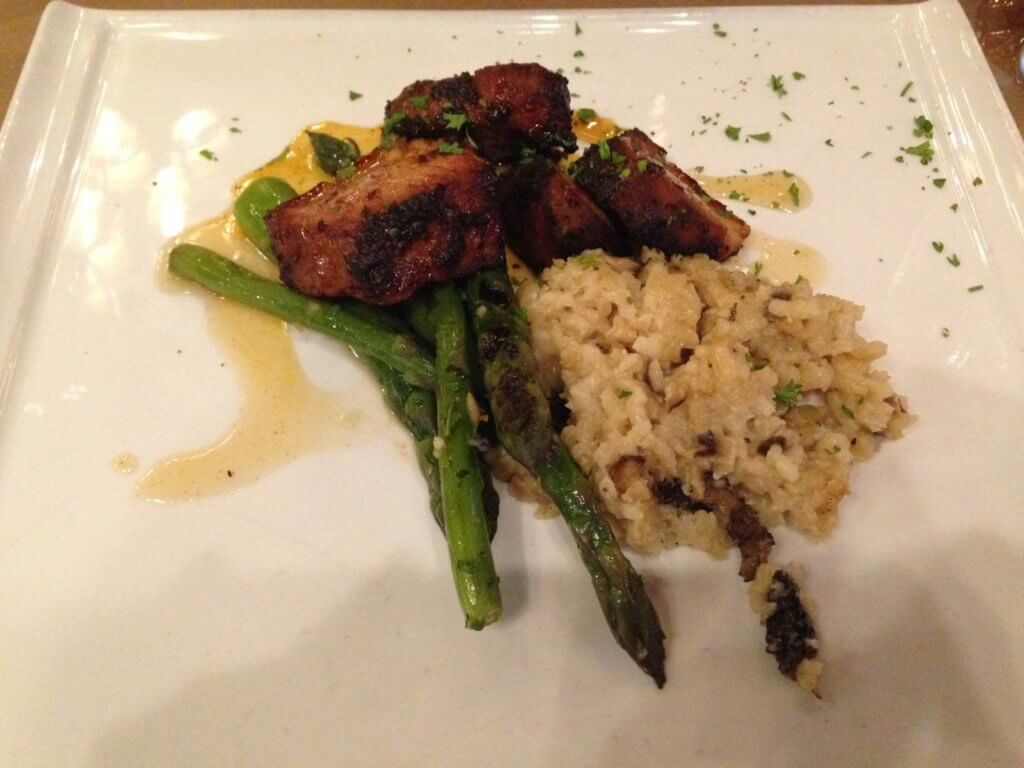 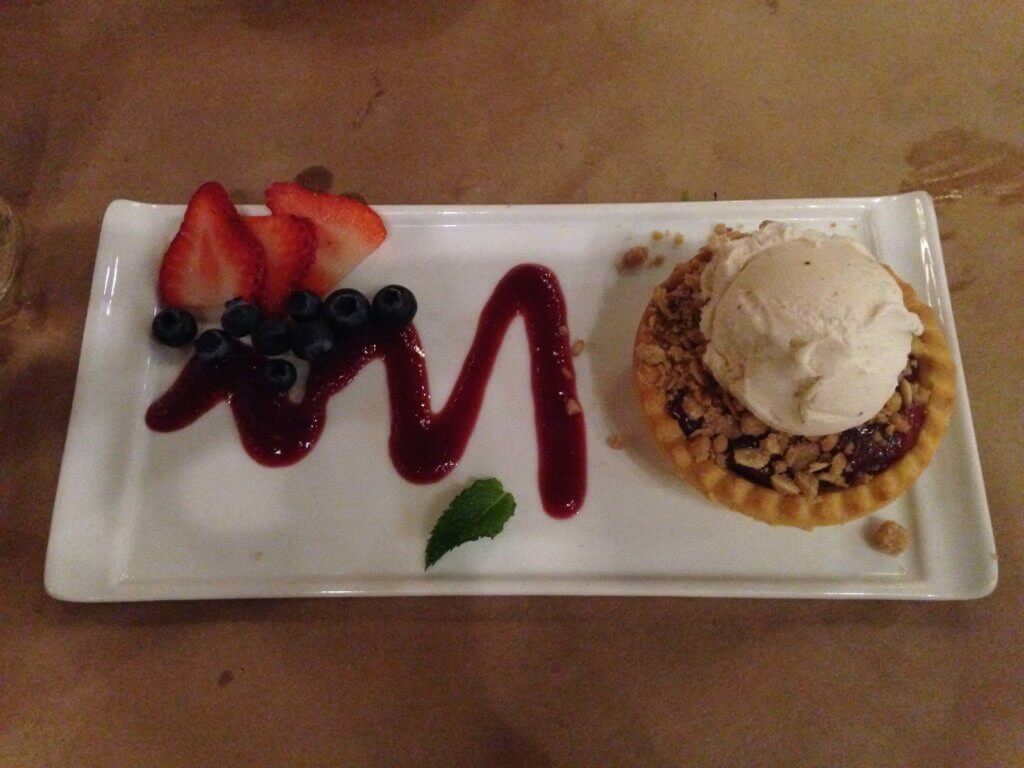 What are your plans for the upcoming holiday weekend? Dusty will be preparing to start the new semester and I have one of my lovely best friends visiting. Hope yours is safe and wonderful!