I often get asked the question. “So, how did you and Dusty meet?”  When it is asked…I chuckle because it definitely is unique. However, it can’t be compared to  Our Romantic Wedding Night. I wouldn’t say the story of how we met is nearly as good as our romantic wedding night story, so don’t be too disappointed.

I remember one night in high school, I think I was a freshmen, some girlfriends and I had just got done watching Coyote Ugly. The movie had ended and we all had hearts in our eyes. Violet Sanford found the man of her dreams (Kevin O’Donnell) unexpectedly at a bar…they have a tumultuous relationship, but he is perfect and encourages her to go after her dream of being a musician, Violet tries to do everything she can to push him away…yet he keeps coming back, until she finally realizes he is what she’s wanted the whole time and they go on happily ever after. Such a love story. Good ole’ hollywood movie love and drama at its finest.  After the movie was over and we had finished stuffing our faces with buttery popcorn, Cheetos and Mountain Dew, we talked about love… the questions that came to mind were…. “Isn’t it crazy that somewhere out in this world is our husband?” ” I wonder what he is doing?” ” I wonder if we’ve walked right by him at some point in our lives and had no idea that someday we’d get married?” “Do you think you will know right away when you see him?” ” Will it be love at first sight?”  Talking about these things would make us giggle in to the wee hours of the morning (or maybe it was the Mountain Dew keeping us up?!)

So here is how our love story begins…

It was my Sophomore year of college, it was the end of September and I had just gotten out of a relationship and was enjoying my singleness and living in the dorms with one of my best friends, Jessie. On Wednesday nights I would wait for her to get done with work at 6:00 p.m.  so we could walk down and eat dinner together in the cafeteria.  The thing about the cafeteria on campus was that they hired students to work at the check in counter…so fellow students would check our “wildcat ID’s” at the door and then would “swipe” it to let us in and thus deduct a meal from our card.  They had really become more strict in comparison to our Freshmen year.  In the past we would lend our ID’s to friends/family to let them get a meal if they were visiting…it was standard, everyone did it…even the students who were checking ID’s and swiping the cards did it. It was an open secret.

Anyways, Jessie and I made our way down to the cafeteria around 6:15 p.m. we jumped in to line behind a few guys and waited as the long line snaked through the connecting hall to the cafeteria…6:00 p.m. was considered “rush hour” and sometimes it could take 10-20 minutes of waiting just to get your ID checked…and then once you were herded through the entrance like cattle you would take your place in yet another line to dish up your food. Thankfully, the line was moving pretty quickly… I had just got done telling Jessie about how they have been so strict lately about carding at the entrances to the cafeteria, that if they just swiped our card and didn’t check the photo on the front as if we were trying to get in to a night club we could be in and out a lot more quickly (the things you worried about as a Sophomore in college – right?)

The guys in front of us walked up to the attendant who was checking and swiping ID’s….the tall blonde guy handed her his ID as Jessie and I stood and waited impatiently.

“This isn’t you….” the attendant said quietly.

“What do you mean? Yes it is…” the tall blonde guy replied.

“No, I am pretty sure you have dark hair in this photo…and a more tan complexion…”

“Yea, I am from Arizona, I get super tan in the summer. It is me…” he argued back.

“Yes it is,” the tall blonde was not giving in…his friends were already through the door on the other side waiting…

After what felt like an eternity…the hunger pains in my stomach had not subsided. I was going from hungry to hangry ….fast. Being the 19 year old loud mouth that I was…I quickly chimed in. Partially out of frustration that yet again the ID checkers (or whatever they are called) were carding as if we were about to enter a night club and secondly…the tall blonde was cute enough to stick my neck out for.

“I know him, I will let you know if it is him or not.” I said heroically. (I really had no idea who he was – but Dusty’s side to the story would claim otherwise).

The tall blonde turned quickly to me a bit surprised.

The ID checker looked at me. Nodded, and handed me the ID.

At this point I just wanted to get in and get my food and there was no way the girl checking ID’s was going to slow that process down. I grabbed the ID from her…and thought to myself….Seriously? I am sure this ID is perfectly acceptable…even if it isn’t him…how can she really truly tell…and our faces are so blurry in the photos…ugh.

And that was when I saw it. The face staring back at me on the ID card. I took one quick glance up at the tall, light skinned, blonde guy standing in front of me…he had a shit grin spreading from ear to ear…I quickly looked back down at the ID… is this guy freaking serious?  I thought to myself.

The face of the person staring back at me from the ID card….was Asian. And looked nothing…I repeat…nothing like the tall blonde guy standing a foot in front of me (come to find out later on – it was the ID of one of his teammates).

I quickly murmured “Yea its him…how can’t you tell its him? Now can we just get through?”

I gave her my ID. Walked by the tall blonde guy. And got in line for my food.

“Was that guy serious?” I asked Jessie.

“No. It most definitely was not.” I responded.

It wasn’t a few minutes later that I saw the tall blonde guy walk in to the cafeteria…that same shit grin spread ear to ear. He got in.

He gave me a little smirk. Jumped in line to get his food. And that was it.

The next time that Dusty and I saw each other was at a Halloween party a month later. I made sure to remind him I was the girl who vouched for him in the cafeteria line. We both thought it was pretty funny.

By the time he accepted the friend request I had a boyfriend. And come to find out he had a girlfriend.

We saw each other again in early December. I gave him crap about not accepting my friend request…he said he was still able to creep on my profile even if we weren’t “officially Facebook friends” at the time Facebook had a weird policy that since I had sent the request it allowed the person being requested to be able to skim through your profile in order to decide whether or not you were someone they knew and wanted to add.  Mark Zuckerberg and I still need to have a chat about that.

Dusty asked for my phone number….and our first date in January was pizza at a little hole in the wall place. We were dating and said “I love you” by early March 2007.

Come to find out the lunch line wasn’t the only time Dusty and I had crossed paths. When I was 15 my brother had a hockey game in the Sault Ste Marie, Michigan and I went along. Dusty was playing for the National Team Development Program at the time and my dad was watching one of their games so I went with him to watch for a period. I obviously didn’t know who Dusty was nor do I remember him being on the ice. But he was there that whole time…little did I know that 4 years later we would meet in a cafeteria lunch line. And 5 years after that we would be married.

So when it came to answering those silly questions my girlfriends and I were dreaming up one late night after watching Coyote Ugly at 16 years old…we weren’t too far off from reality.

“Isn’t it crazy that somewhere out in this world is our husband?” ” I wonder what he is doing?” ” I wonder if we’ve walked right by him at some point in our lives and had no idea that someday we’d get married?” “Do you think you will know right away when you see him?” ” Will it be love at first sight?”

Here are some photos of our baby faces from our first year together. The photo below was the first one Dusty and I had taken together after his senior night hockey game at NMU. 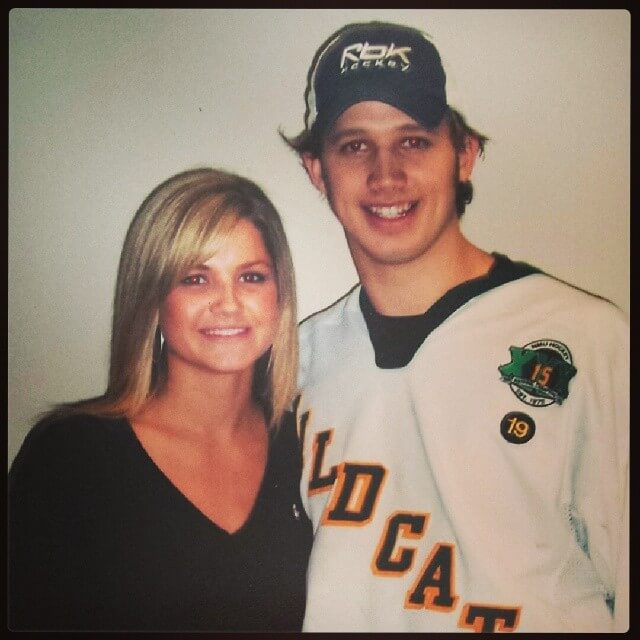 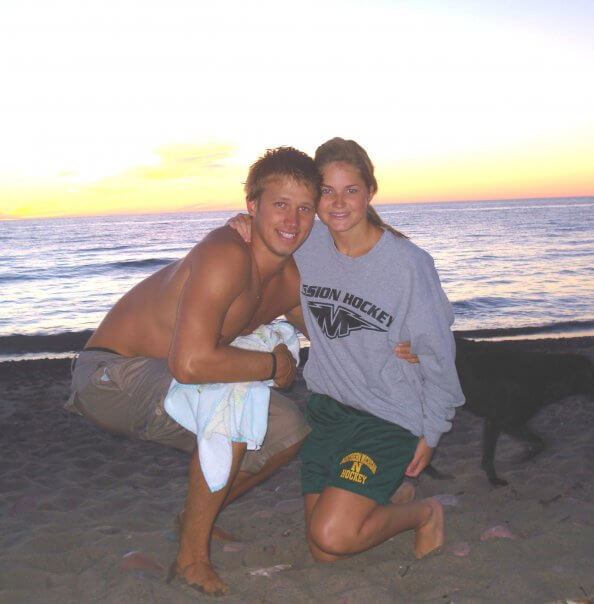 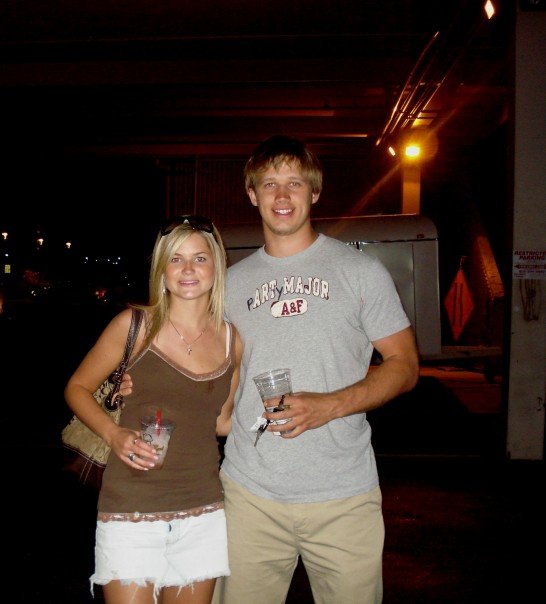 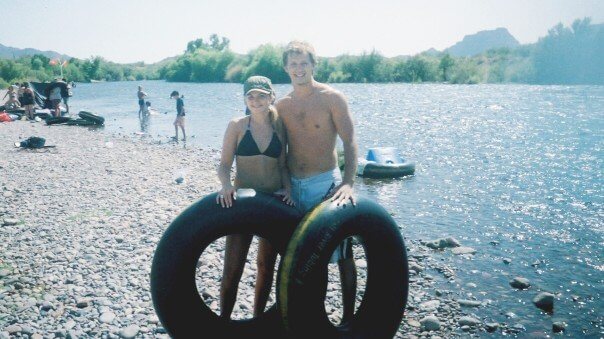 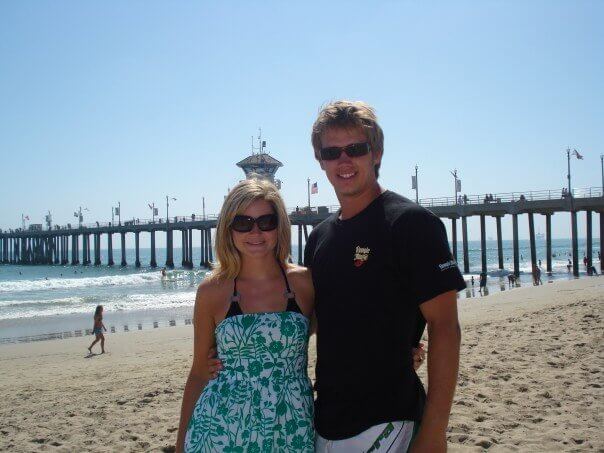 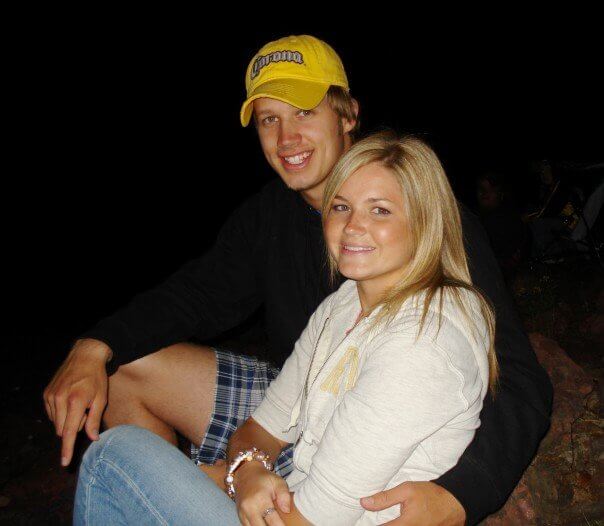