As you may have realized by now…Dusty and I have adopted a puppy, giving Gus a little brother! The little guys’ name is Reo and he is the cutest little brindle coated Dachshund – Plott Hound mix. We went out on a sunny Saturay afternoon in search of a pumpkin patch to get our Halloween pumpkins and instead came home with a puppy. To this day Dusty is scratching his head and wondering how I made that happen. None-the-less, we knew we wanted to get Gus a play mate and this day in particular seemed to be right.

We drove to the local humane society telling ourselves “we are just going to go and look”. But you know that never ends up being the case when puppies are involved. Reo was named “Justin” at the shelter (I have this weird thing with giving your dog a very human name) so we changed it ASAP! We found out that Reo came from Arkansas on what they call a “puppy wagon” which is a truck that carries the animals from shelters that otherwise would have to euthanize them because there are too many to keep in the facility.

Reo looked tired, skinny, malnourished, and scared. You could tell he had been through a lot in a short amount of time, when we saw him at the shelter he was 8 weeks old. All he wanted to do was sleep and snuggle in the one little blanket they had for him in his kennel. He had just gotten to the shelter two days prior…his eyes were bright and adorable…but his demeanor proved to be tired and weak. We had a hard time getting him to play and interact like a normal puppy the first few days. After some snuggling, food, and a little love he soon started to come around. He started to engage more with Gus and started to have normal puppy behaviors.

The first few days and nights were busy as Reo adjusted to his new surroundings, even finding a way to poop under our bed… yea, not cool. One minute he was innocently playing on the living room floor and then he threw the ninja dust and had me looking everywhere for him…that was when I heard something under our bed….and there he was…laying next to a pile of poo…tail wagging looking proud… as if to tell me “hey mom look what I found!” It took all I had not to puke trying to crawl under the bed and clean it up…Febreeze, essential oils, disinfectant sprays…the whole nine yards. As I was wedged between the floor and our bed….Reo found it funny to chew on my toes and pull my socks off…mocking me of course.  This happened twice…and then I learned to barricade the doorway to our room so he can’t get too far. He has gotten much better and has been making it outside for the most part as of late – whew!

Aside from leaving his droppings in inconvenient places, he loves to snuggle and eat! He has quite the appetite. Dusty calls him “raw-hide Reo” for fun because he lovessss rawhide dog bones (which totally doesn’t bother me because it keeps him from chewing on my shoes). He has a feisty little personality and has learned sit, stay, lay down, kisses and shake in only two short weeks. He is Gus’s little shadow and follows him everywhere and Gus loves it. They definitely will be the best of friends! He fits right in….and is a permanent member of the Collins Clan.

Below are some photos of our first couple weeks with Reo!

Our first family photo! Gus isn’t too sure… 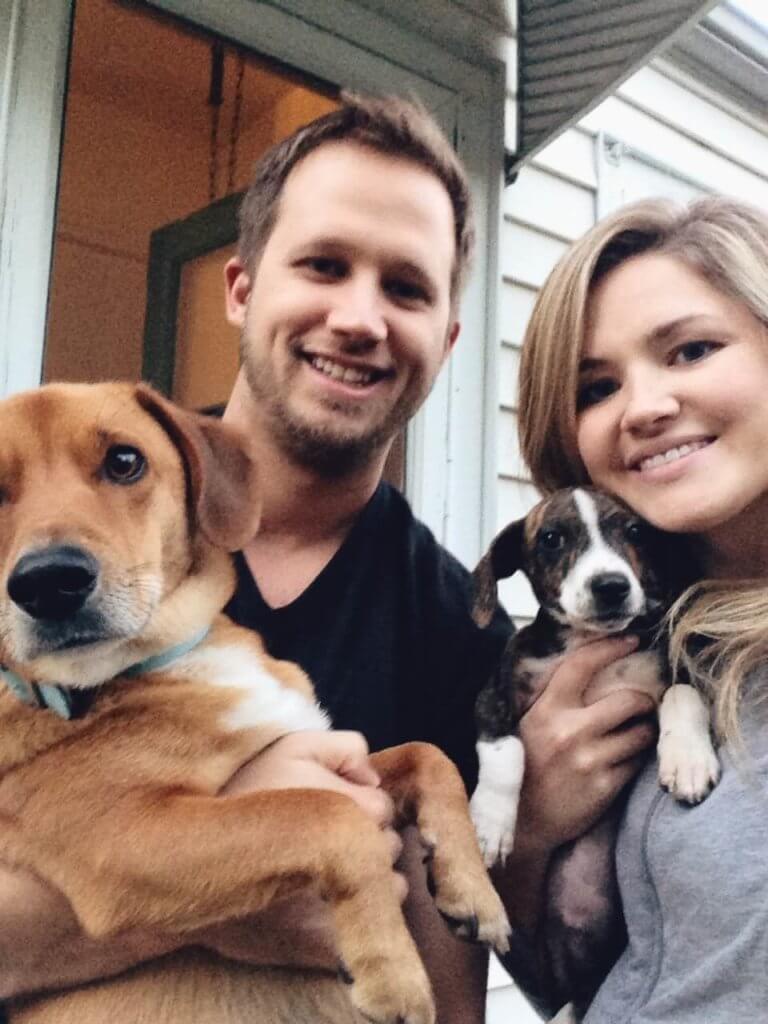 Snuggly our boy on his first day home! 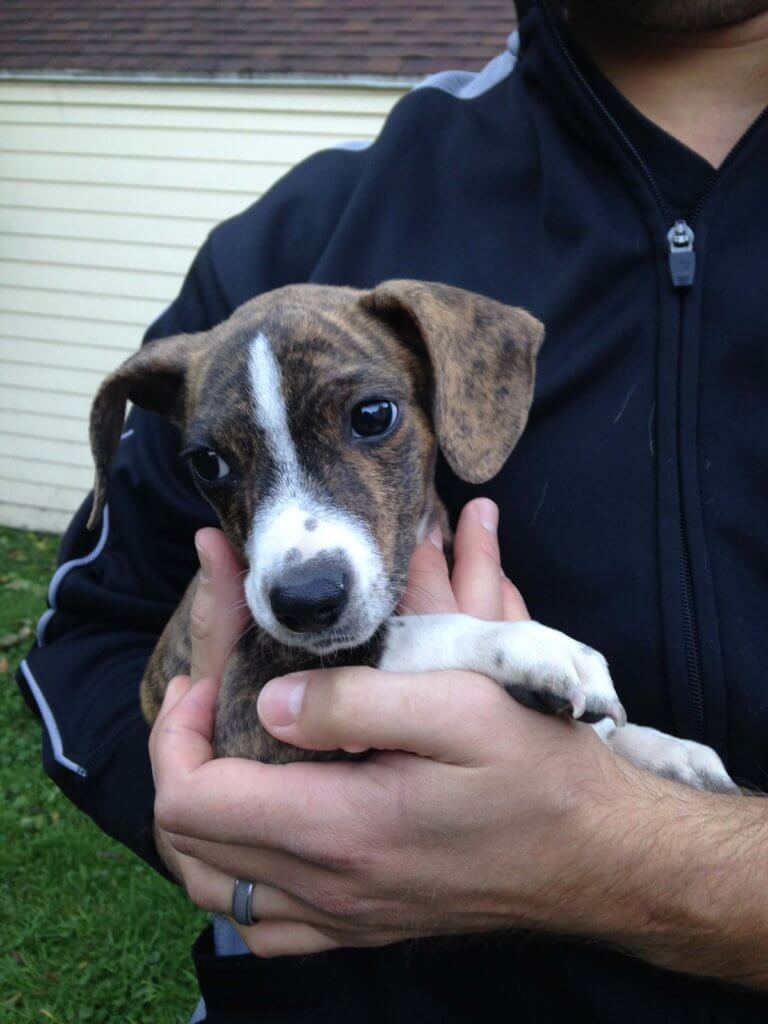 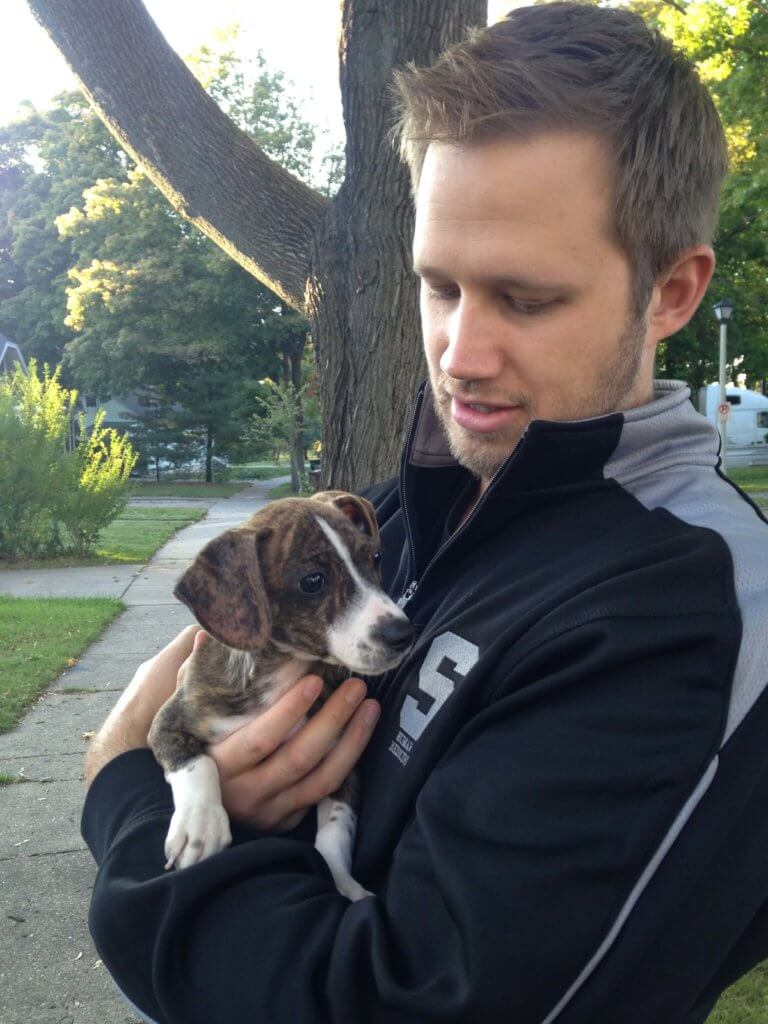 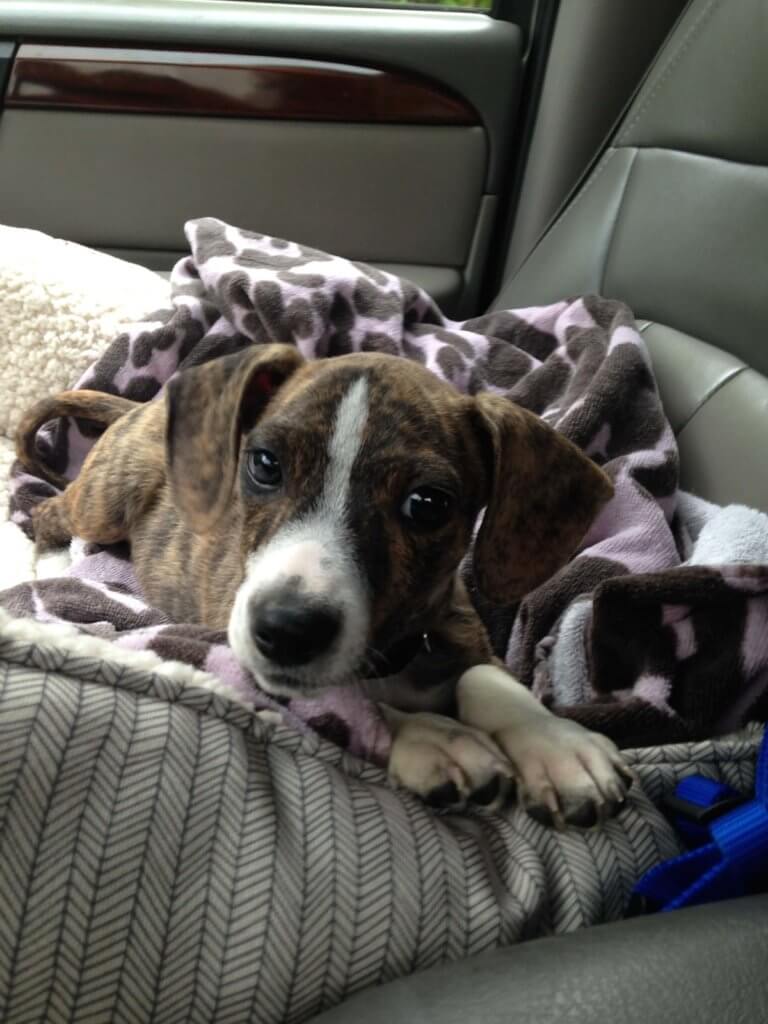 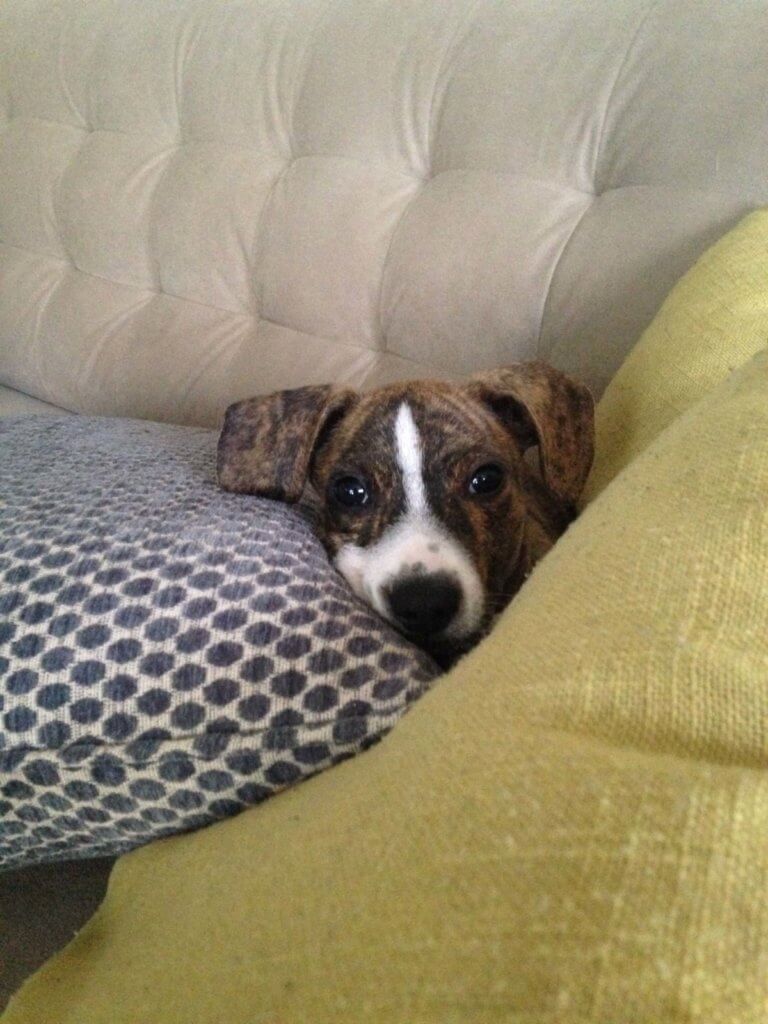 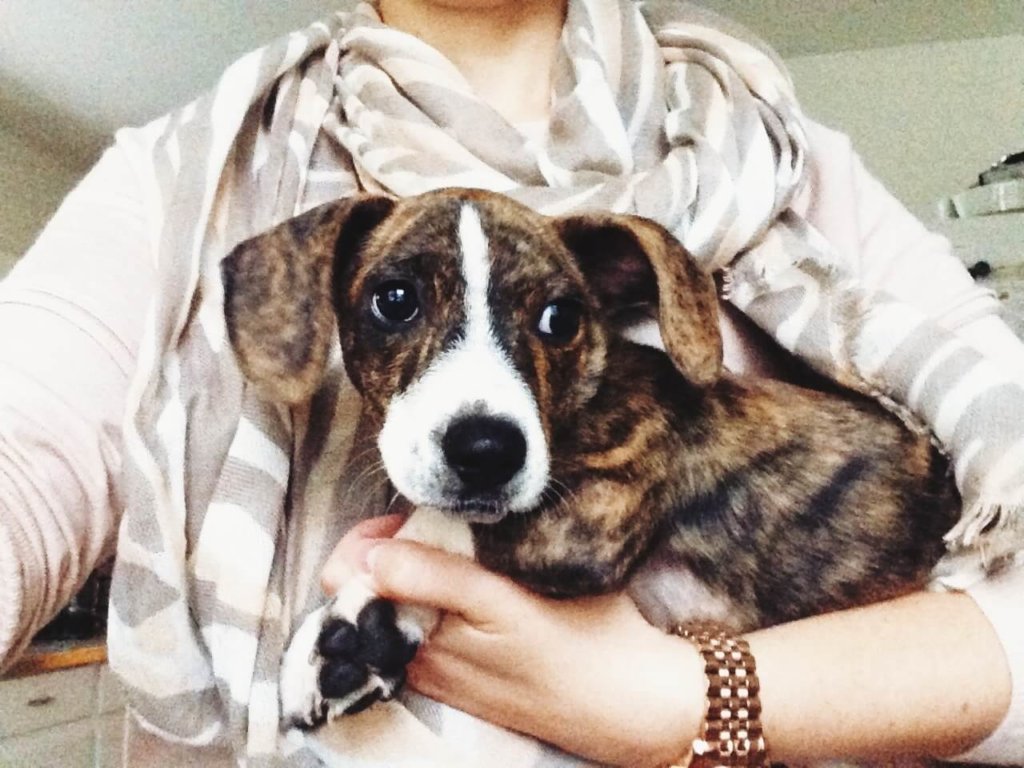 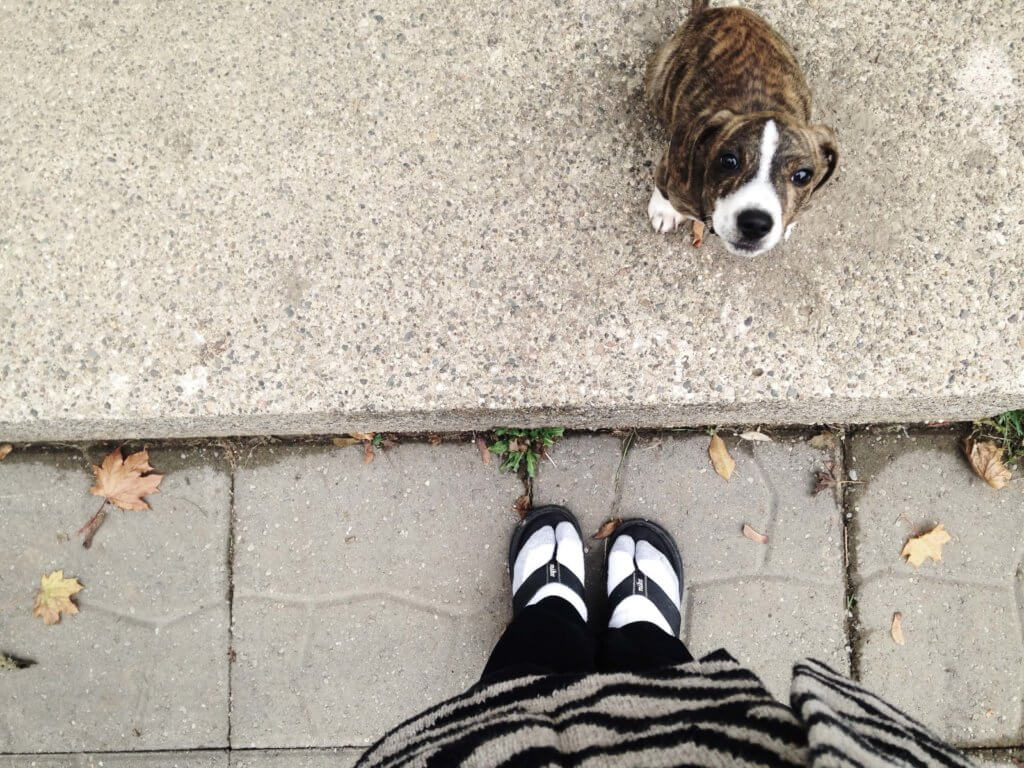 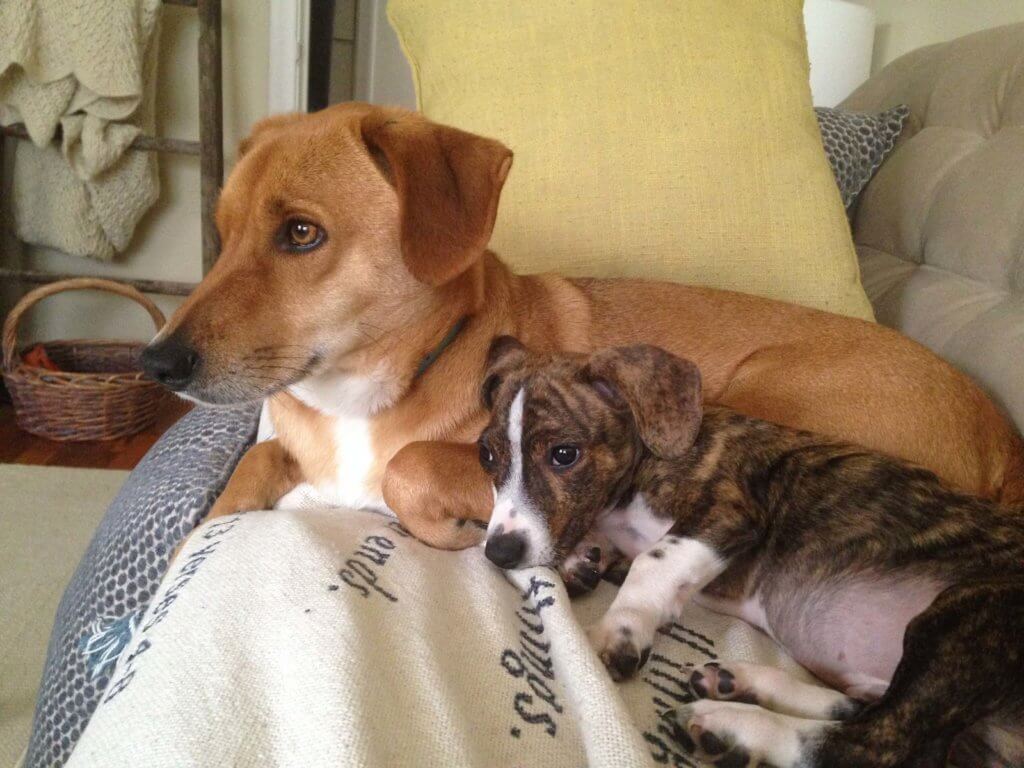 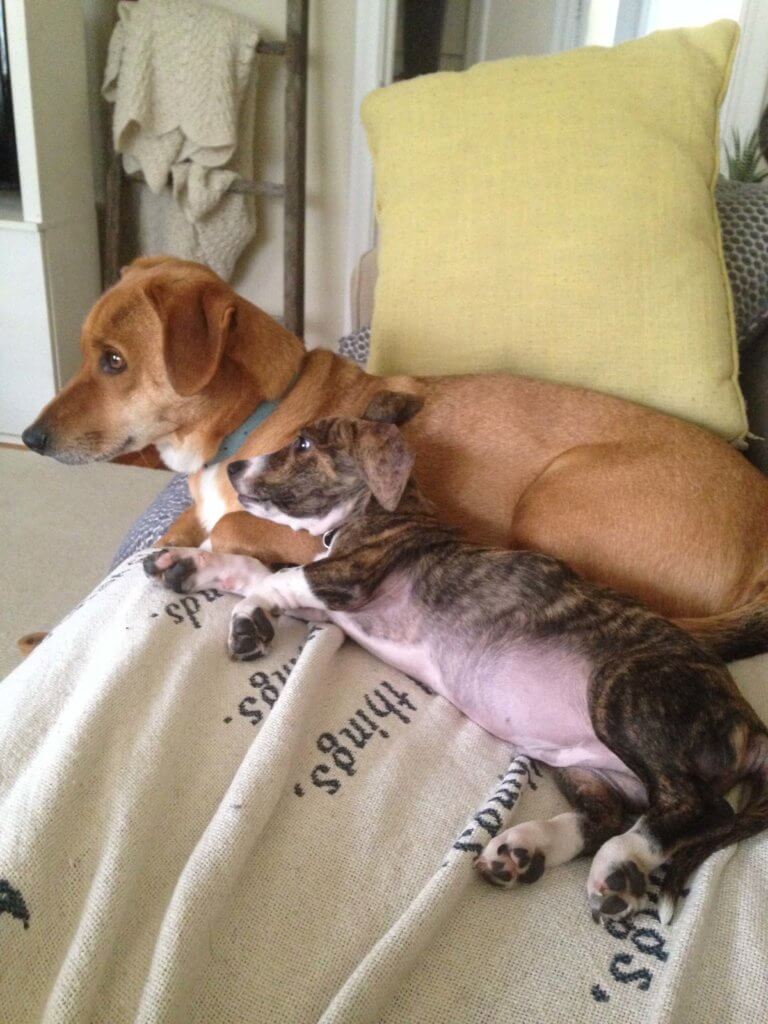 More updates on how Reo is doing coming soon!

What tips do you have for training a puppy? Please share in the comments below!